OH, CHUTE! The Science of Skydiving

No one bothered to close the door as the plane started rolling forward. I sat, straddling the bench and facing the back of the plane, with a line of new and seasoned divers behind me. As I stared out the opening, watching the ground get farther and farther away, I felt my instructor, Charlie, behind me fumbling with hooks and chains at my shoulders. I looked to my right. On the other bench, my best friend was also getting strapped to his instructor. Within minutes, I saw my friend’s instructor pointing him to the opening, beyond which I could only see blue sky. They shuffled to the doorway. Before I had time to process what was about to happen, I saw them fall out of the plane and disappear. Seconds later, Charlie ushered me to the same ledge. There was nothing but 14,300 feet of air below me. I felt a gentle push, and then suddenly, just…falling. 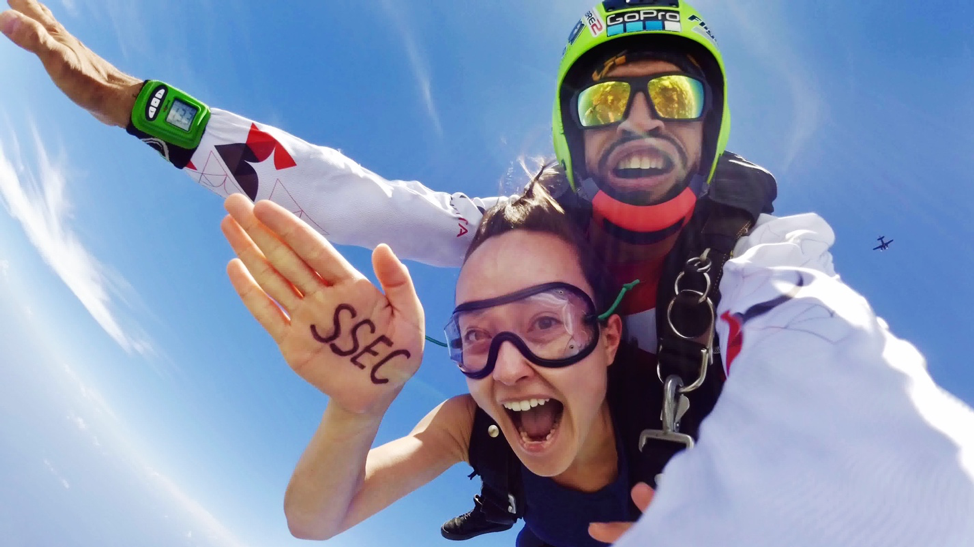 Skydiving had always been on my bucket list, but part of me never believed I could actually do it. Then, while planning a trip to Puerto Rico, my friend suggested we go. I knew I would regret it if I didn’t do it, so I bought myself a ticket for the highest jump. Go big or go home, right? Through this process, I learned a lot about the science behind skydiving.

First, skydiving is just one type of parachuting. Parachuting is any activity that involves using a parachute to safely get to the ground. There are many other types of parachuting, including BASE jumping, which involves jumping off of a Building, Antenna, Span (bridge), or Earth (cliff) (hence the acronym “BASE”), and static line or instructor-assisted deployment, which both involve mechanisms that pull a parachute out as a person is jumping.

Skydiving is different from these and other forms of parachuting because divers fall from a much greater height and for a longer distance before releasing a parachute. With other forms, parachutes immediately open to slow people down. In contrast, skydivers allow gravity to help them accelerate, or move faster and faster toward the ground, until they reach terminal velocity. Terminal velocity is when the air resistance acting upward on the body prevents the diver from falling faster. At that point, the body falls at a constant speed, about 120 miles per hour (this speed varies based on a person’s mass and surface area). This period of time when the diver is not using a parachute is called free fall.  The only forces on the diver falling are gravity pulling the person down and air resistance acting against it (this is different from the definition of free fall in physics, when the only force on an object is gravity). After the diver releases the parachute, they are no longer in free fall; instead, an increase in air resistance due to the big parachute causes the diver to slow down significantly, allowing for safe landing.

When people go skydiving for the first time, they usually do a tandem jump. This is what I did. A person is strapped to a professional diver, or instructor, who helps get them both safely to the ground. This certified, professional diver knows exactly when to release the parachute, how to control it to land safely and on target, and what to do in an emergency. They also do all of the landing. New divers lift their legs up as the instructor’s feet hit the ground. This prevents new divers from getting injured. 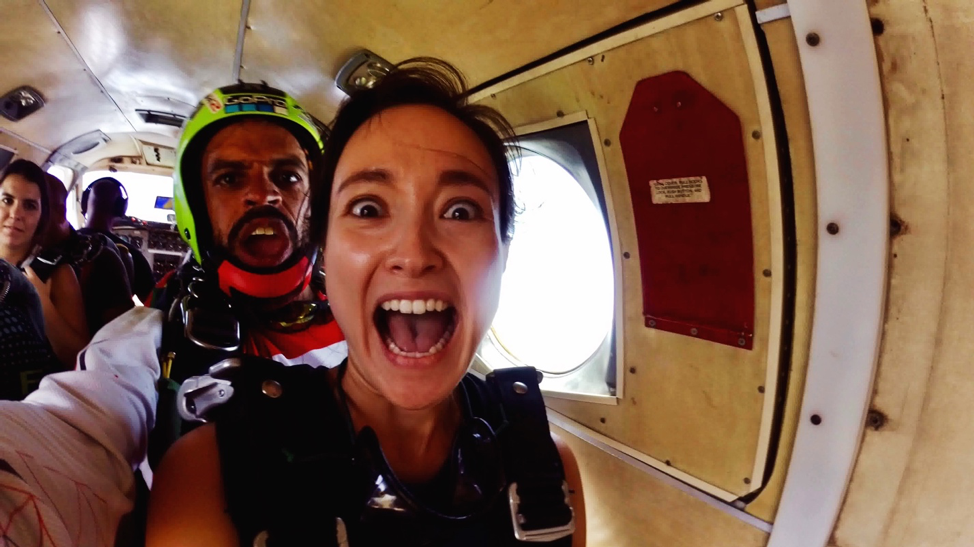 Charlie had a camera attached to his hand to record all my emotions. This was my face as we were reaching the “drop zone,” or the area and height for jumping. Tina Zdawczyk

Second, people can only safely jump from a certain height, and it depends on the type of parachuting. For skydivers, this usually means 10,000–18,000 feet. This gives divers enough time to leave the plane safely, enjoy free fall, and land on the ground safely.

There’s a reason for the minimum height. If a diver jumps too low, they don’t have enough time to build up speed and use air flow to stabilize their position, which is important for a parachute to open correctly. In free fall, a diver is falling at more than 10,000 feet in one minute! When we jumped from 14,000 feet, we had only a minute of free fall, during which Charlie kept us steady and prepared to deploy the parachute. After he released the chute, we spent about the next four minutes, or about 4,000 feet, gently gliding down. We went from traveling 10,000 feet in one minute, to 1,000 feet per minute… meaning our speed when we landed was 10% of what it was in free fall. We were able to do all of this because we jumped at a high altitude.

This might make it sound like a good idea for skydivers to jump from as high as possible. Unfortunately, this can also be dangerous. At higher altitudes, lower atmospheric pressure means thinner oxygen and colder temperatures. Most commercial planes, like those used to travel, fly at an altitude more than twice as high--around 35,000 feet. However, these closed environments are controlled and pressurized to maintain enough oxygen and comfortable temperatures for passengers throughout the flight. Skydiving planes and skydivers don’t have these accommodations. These planes are not closed environments; they must be opened at high altitudes, and divers must be able to breathe and not freeze. Therefore, most skydivers frequently jump between 10,000 and 15,000 feet in the air. Those that choose to go higher use supplemental oxygen and often wear suits to keep warm. 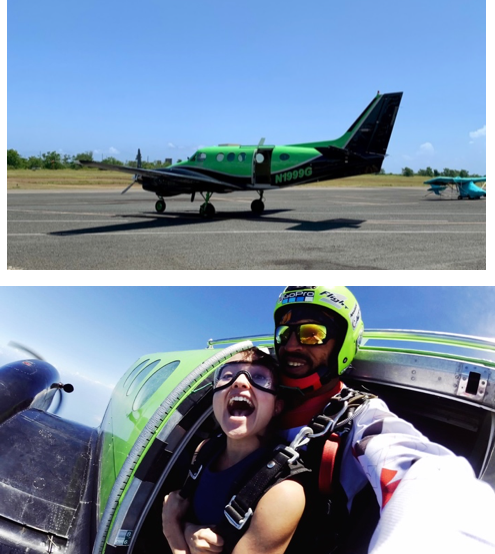 Top: The plane we used. Inside, there are just two benches. Everyone jumps out of the side door seen here. Bottom: Charlie and I standing on the edge of the open plane door at 14,300 feet, about to jump. Tina Zdawczyk

Third, standard skydiving is relatively safe. To start, everyone skydives with two parachutes. The main parachute is usually packed by the professional divers at the dive site. In the US, laws require that the back-up, or reserve, parachute is inspected and packed by a certified Federal Aviation Administration parachute rigger every 180 days. There’s no fear about a parachute failing; if the first one (for some unlikely reason) fails to open, the second one will help a diver safely reach the ground. For tandem jumps, these parachutes are larger to accommodate slowing down two people and creating more air resistance.

Additionally, many skydivers use what’s called an automatic activation device, or AAD, as another fail-safe. This is an electronic or mechanical device that measures divers’ speed at different altitudes and can detect if a diver is still free falling at a height when they should be parachuting (around 2,500 feet). If so, it will automatically deploy a parachute. Even if something happens to a diver, a parachute will still open. For these reasons, it’s very unlikely for a diver to land without an open parachute. 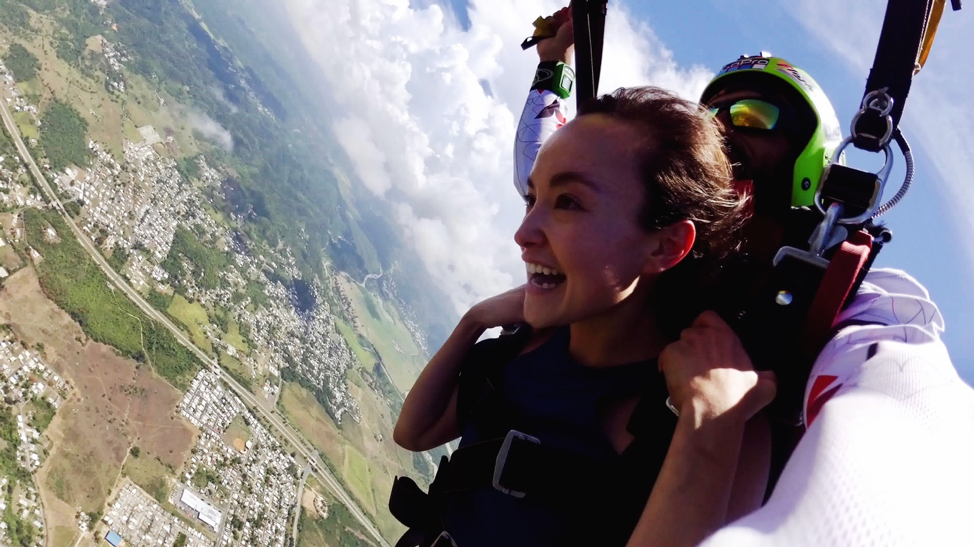 This photo was taken right after Charlie deployed the parachute. He used two handles, one in each hand, to control the shape of the parachute. This allows him to change our location and get us safely to an open field. Tina Zdawczyk

To many people who haven’t done it, skydiving seems crazy. And it makes sense to be scared. When I was standing on the very edge of a tiny plane at 14,300 feet, I was having serious doubts. Why did I think I could get to the ground safely by jumping out of a safe plane? But as soon as I saw my friend leave the plane, I knew I had to follow. And honestly, I don’t regret it. I would do it again. The view is unbeatable, I learned a lot about a new sport, and I gained a sense of pride in overcoming my fear. 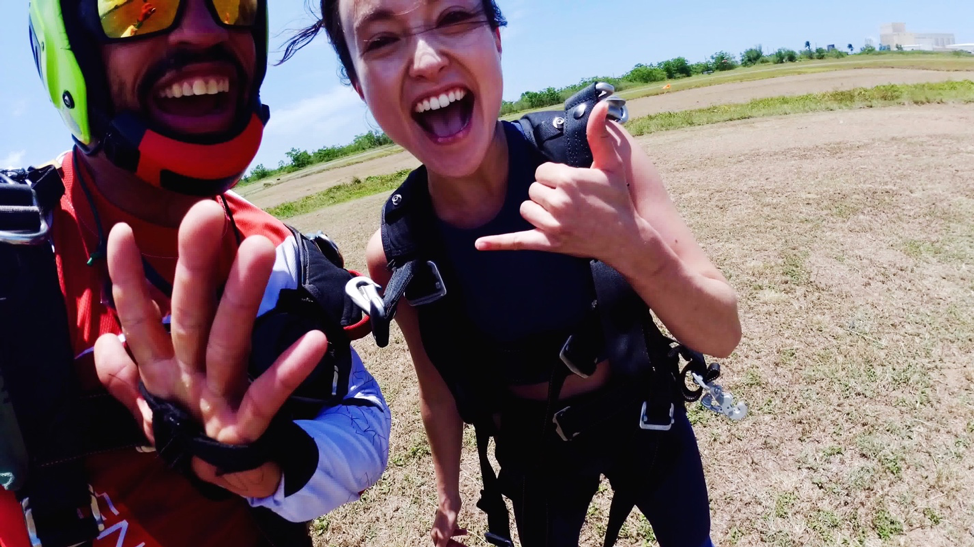