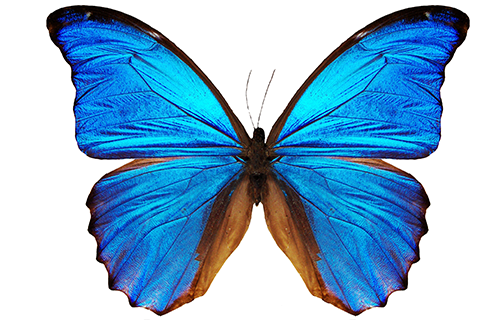 The deep iridescent blue is even more dazzling in real life. And yet this butterfly's wings, according to any sort of chemical analysis, are completely colorless. Nothing in them is truly blue. The mystery of how light that is the color of satiny sky can radiate from translucent material has puzzled scientists since Newton. The quandary is simple: how can something be produced from nothing? As is often the case with science, the answer has been there all along, but simply took a while to find, as scientists needed powerful microscopes to make the discovery. When they at last brought the wings into focus beneath a lens, the lurking cause of color emerged: scales. The wings were blanketed in millions of scales.

Of course, this doesn't seem like an answer at all. How can translucent scales, even quite a lot of them, create color? There must be some element inside them that exudes blue. As it turns out, it is not the miniature tiles themselves but their configuration that matters.

A butterfly's wings may be covered by two, three, or more layers of scaly sheets. The layers are stacked and buttressed by microscopic arches and columns like a miniature Roman city. When a ray of light strikes a wing, some of it bounces directly off the top level of scales. Some of it burrows through the first layer and bounces off a lower level.

Light falls from the sky as waves that are like coiled springs. Some of the waves are huge -- if you encountered them as water at a beach, they would crash over your head in an instant. Some of the waves are very small, like the surf where the ocean meets the sand. Our eyes see waves of different sizes as separate colors. So when a pack of waves ranging from Chihuahua to German Shepherd stream from the sun down towards the jungle, every color in the world rains down upon the wings.

The butterfly wishes to accept every color of light and to return to the world only a single, intense blue. This is where the stacked city of scales on its wings comes in quite handy. It was built not for Romans but for light waves, which are nano-tiny, just a series of photons strung together. But the intricate structures refuse to accommodate all light waves -- they were built just for a select wave size, the size that looks blue. Other waves (from puny purple to robust red) are too small or too large to play in the jungle gym of levels stretched across the wings. Constructed specifically to cater to one wavelength alone, the Morpho's wings were destined to flash blue from the womb (or, more accurately, the cocoon).

The intense blue is not the only virtue of these wings. Similarly entrancing is their iridescence, which makes them look like living satin. This effect also owes its thanks to the structured layers. Although every wave that enters our eyes after striking the butterfly is the same size -- size "blue" -- not every blue wave is aligned with its fellows. If two waves travel next to one another, one wave's crest may correspond with the other's trough; any two waves may be offset from one another by a large amount or by a small one. To weave its living satin, the wing matches light waves crest to crest and trough to trough. It ties the waves into bundles that travel together, in tandem, up, down, up, down, because doing so amplifies the single color, driving its intensity up to an iridescent sheen. The wings align waves in this way by using the multiple layers to their advantage. Waves that bounce off the lowest scaly surface have further to travel down into the wing, and further to travel back out of it. Comparatively, rays that strike the top surface have less far to go. That means that if waves that are out of sync head for the wings, they can be jostled into alignment by striking and bouncing off different surfaces.

It is almost impossible to believe that these small fluttering organisms -- full of squishy material and random variations in size and shape -- are invariably able to grow optical marvels upon themselves. It is even more unbelievable that nature alone produces these razor precise arrays, which are still to this day too complex for humans to manufacture using machines. In a contest of optics between modern science and a butterfly, nature would win.

Morpho butterflies are great to study in the classroom. Interesting topics to teach in class are their reproductive cycle, the way they taste food (with sensors on their legs), about the countries where they are found (mostly Central and South America), and about their optical prowess.

Learn more about the blue morpho butterfly in Expedition: Insects, an iBooks Textbook from the Smithsonian Science Education Center. 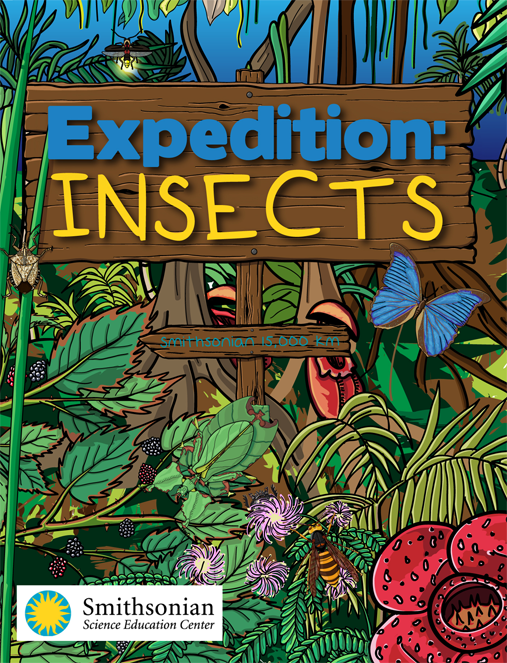