From their lookout in the White Mountains of the western United States, the bristlecone pines have seen it all. They watched from afar as the Confederates suffered heavy losses at Union hands; they heard the scratch of Shakespeare's quill; they heard the first fireworks bang at their invention in China; they listened to the grinding of stones as the Egyptians erected the Great Pyramid at Giza. Through practically every point in human history -- for the last 5,000 years -- these trees have remained steadfast witnesses, rooted in the soil.

The bristlecone pines have not lived so long because the environment favored their existence. To the contrary: they grow in extremely harsh environments, high up in the mountains. Scathing winds, highly acidic soil, little oxygen, and cold, long winters have barraged these trees literally for millennia. The natural world has not been especially kind to them. 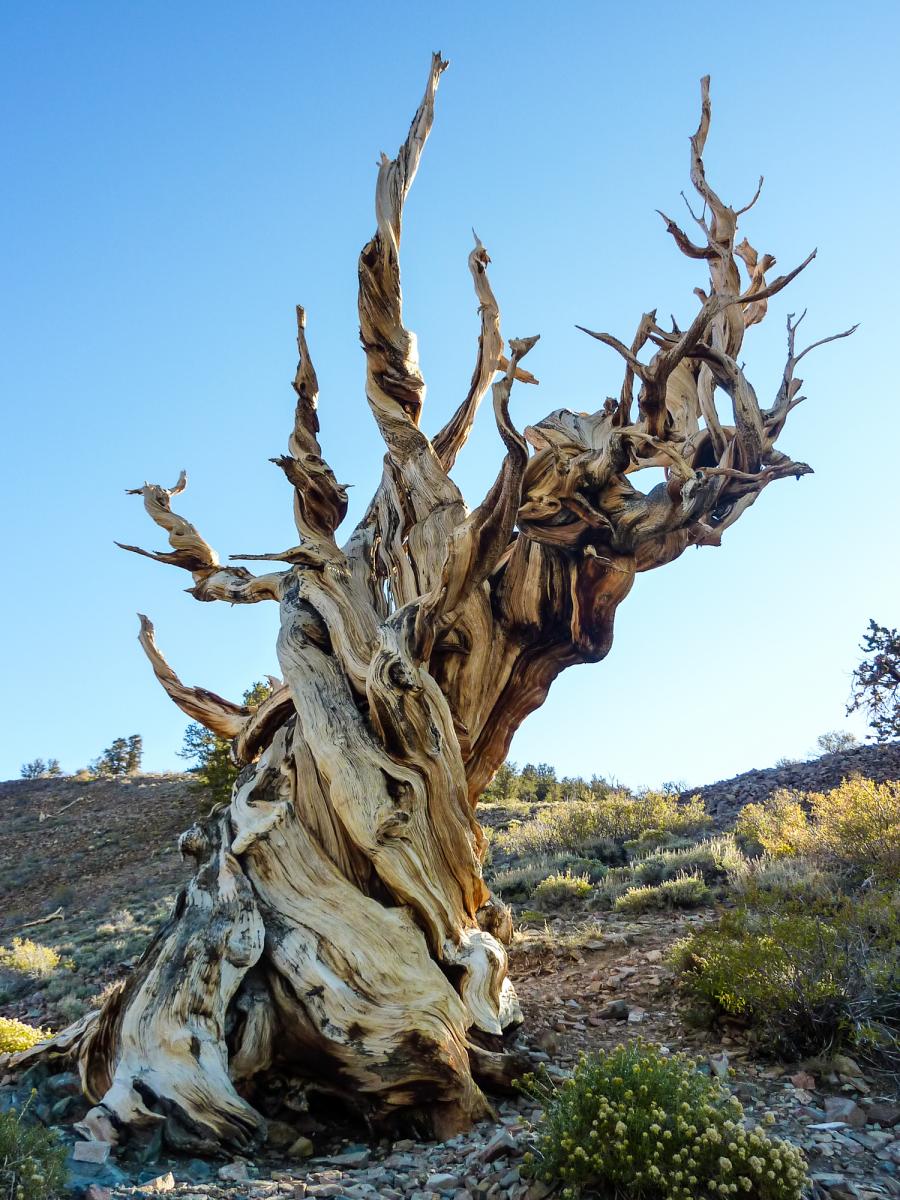 Bristlecone pine trees are gnarled and old. They grow at the high altitude of 10,000 feet above sea level. (Image from here.)

Still, they have endured. They have done, on an epic scale, what we tell our own youngsters to do: when life gives you lemons, make lemonade. They have evolved super dense bark that doesn't allow insects or bacteria to bore through their steely trunks. They have mastered the ability to turn off most of their functions for a prolonged period of time in order to save energy in times of drought. They are heroically tolerant of damage to themselves: when a root and the section of trunk it nourished die off, the rest of the tree soldiers onwards anyway. They are the thick-skinned, no-nonsense Titans of the wild, hardy and resourceful and tough.

Named after the Bible's longest-living character, the bristlecone pine Methuselah was until recently considered the oldest tree in the world. It lives somewhere in eastern California -- the United States Forest Service keeps its exact location secret, in order to protect it -- and it is only twenty-six feet tall. It's difficult to imagine that a wizened old specimen like Methuselah could reproduce. But like Sarah and Abraham in the Old Testament, Methuselah has created offspring as a grandfather of organisms, far past any expected fertile stage of its life. Just over ten years ago, seeds carefully harvested from Methuselah's cones were planted in soil. They sprouted little bristlecone saplings as if it didn't matter at all that their parent was nearing its 5,000th birthday. 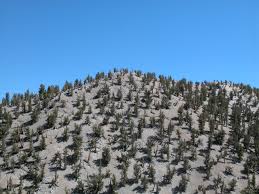 This is the stark landscape of the White Mountains in California, where the oldest trees in the world have survived for millennia. (Image from here.)

It's not just the unfolding of human history that these trees have seen. They have also observed the saga of climate change, and this time not only as spectators. Because the slow changes in the weather and air have been absorbed by their trunks and become part of their rings, these trees act as chroniclers of climate history. By inspecting the wood in a bristlecone tree, scientists can determine approximately how much rain fell there between the years 1267 and 1342. They can determine how much carbon dioxide clouded the air at any given point. They can graph temperature's temperamental dips and ascents through the centuries. These trees are climate data mines shrouded in bark.

And what scientists have learned from analyzing these arboreal records shows us that change is happening -- right now. The rings that were added to some bristlecone pines during the second half of the twentieth century -- the blink of an eye for a tree that heard the shrieks of Baby Moses -- are significantly wider than any rings made in the last 3,500 years. The sudden and notable swell in their most recently created rings indicates that the air that envelops these trees has changed. A study has concluded that the reason these stubbornly invariable rings have suddenly been varied is that temperatures in the past few decades have clawed their way up the thermometer. This means it's hotter overall now than it has been anytime in the last several millennia. And the natural world -- at least, those ancient organisms standing sentinel up in the mountains -- has noticed.

Learn more about the bristlecone pines from the Encyclopedia of Life.