A Closer Look at Fall Foliage

There are lots of great things to love about fall. There’s cooler weather, apple picking, Halloween… but arguably one of the best things is the natural art show that deciduous forests put on. Every fall these forests turn from their typical green to vibrant hues of red, orange, and yellow. It’s a spectacular site to see and one that people travel miles to visit (in Vermont we call them leaf peepers). But what’s the story behind this beautiful show of color, and why don’t all trees do it? As always, there’s some pretty cool science happening behind the scenes.

The forests that put on these color shows every fall are what are known as deciduous forests. These forests consist of many different kind of trees (oak, birch, beech to name a few) but they have some common characteristics across them all. A major characteristic that they all have is broadleaves. These leaves are more sensitive to damage than the needles of a conifer (or evergreen as they’re known). The color changing process for these leaves happens in a few different stages. 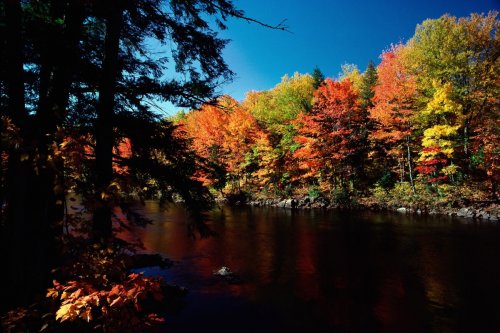 In early fall we can just start to notice the days getting shorter as summer winds to a close. The trees notice as well. Shorter days means less sunlight available that they can use for chlorophyll production. The breaking down of chlorophyll during summer is what creates the vibrant green color in their leaves. As the nights grow longer the leaves begin to run out of chlorophyll, allowing for carotenoids and anthocyanins (which create orange, yellow, brown, and red hues) to come through more vividly.

During the same time that these brilliant foliage colors are being revealed, the leaves prepare themselves to fall. Broadleaves are weak compared to a conifer’s needles and can’t not survive the winter weather. Not only would the leaves themselves not survive, but if they stayed on the tree they would leave it vulnerable to damage. In order to protect the tree the veins leading from leaf to tree are closed off and the leaves separate. A heroic end to be sure.

But how do conifers differ? Coniferous trees are what you might generally refer to as pine or evergreen trees; they have thin, waxy needles instead of broad leaves. In stark contrast to they’re deciduous counterparts, conifers needles don’t change colors and aren’t shed annually, but only every few years.

Conifers don’t contain all of the same compounds as deciduous trees that would allow for the color changing process. Their needles only change to brown when they’ve finally fallen from their branches after many seasons. The secret to success for these conifers comes from the waxy coating of their needles. This coating protects the needles from cold where broadleaves were left vulnerable. Also, in contrast with deciduous trees, the fluid inside of conifer needles is much more resistant to freezing and can therefore survive harsh winter temperatures without harming itself or the tree. 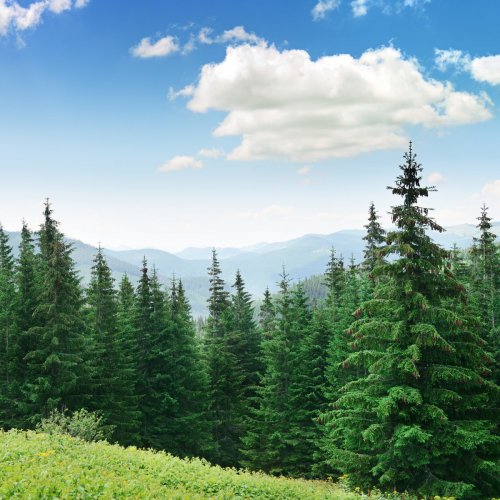 It’s interesting to look at these two types of forests in comparison to one another. Each developed ways to protect themselves against cold, but while one goes dormant in the winter the other is protected by a waxy coat. Yet, no matter which method, both types of trees return each year again and again. Lucky for us, because our landscapes would be much less beautiful without them.