Falling with style: The science of ski jumping

In the movie Toy Story, Woody tells Buzz Lightyear, “That wasn’t flying. That was falling with style,” after he gracefully glides around a room. This idea that a person could fly through the air has intrigued civilizations since ancient times. Stories from the Ancient Greeks through 18th century Europe tell similar tales of men fashioning wings from wood, feathers, and cloth imitating birds before leaping from towers, hills, or cliffs. This fascination to soar through the sky continues to this day, and the men and women of ski jumping continue the millennia-old tradition of falling with style.

The objective of ski jumping is to jump as far down the hill as possible, but as Woody said, ski jumping is not simply flying as far as the athlete can. Style is also a large component of it. Ski jumpers are judged on style and distance in reference to the K line. K line comes from the German word “kritisch,” which means critical. Points are deducted for every meter short of the K line they land and added for every meter farther than the line. The normal hill in the 2018 Olympics is a K98, and the K line is 98 m from the end of the jump. The large hill is a K125, with the K line at 125 m. This means ski jumpers must use physics to help them fly to the K point or farther. 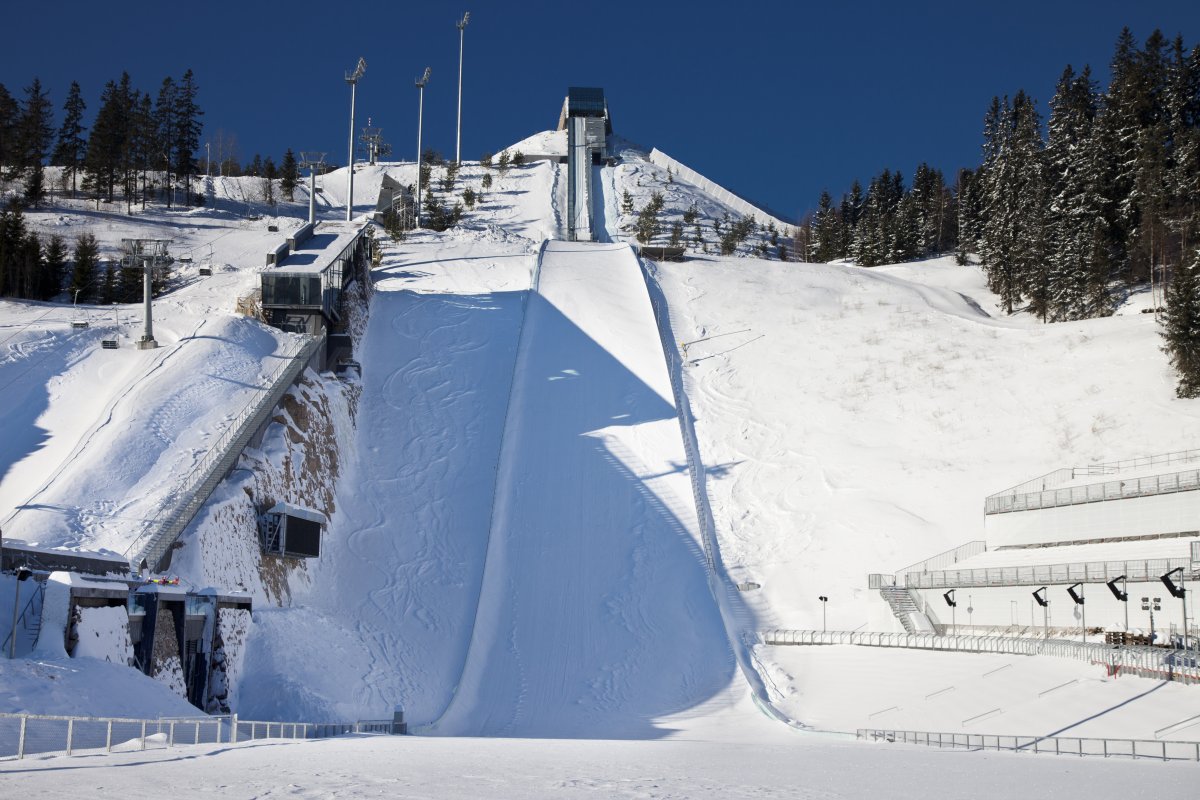 Ski jumping has four distinct sections, and in each of these sections, ski jumpers must harness physics very differently. The first is the in-run, or ramp. Ski jumpers start by positioning themselves on a metal bar at the top of this ramp. At this point, they are utilizing the physics of gravitational potential energy. It states the higher an object is, the more potential energy it possesses. When skiing down the ramp, ski jumpers convert their potential energy into kinetic energy. The goals are to minimize air and snow resistance in order to gain speed and momentum before takeoff.

There are multiple ways ski jumpers minimizes resistance while skiing down the ramp. The first is body position. They bend their knees into a crouch to minimize drag by decreasing the surface area of their body in contact with the air. Ski jumpers also maintain a streamlined position by utilizing a sleek helmet and suit while keeping their arms behind them. 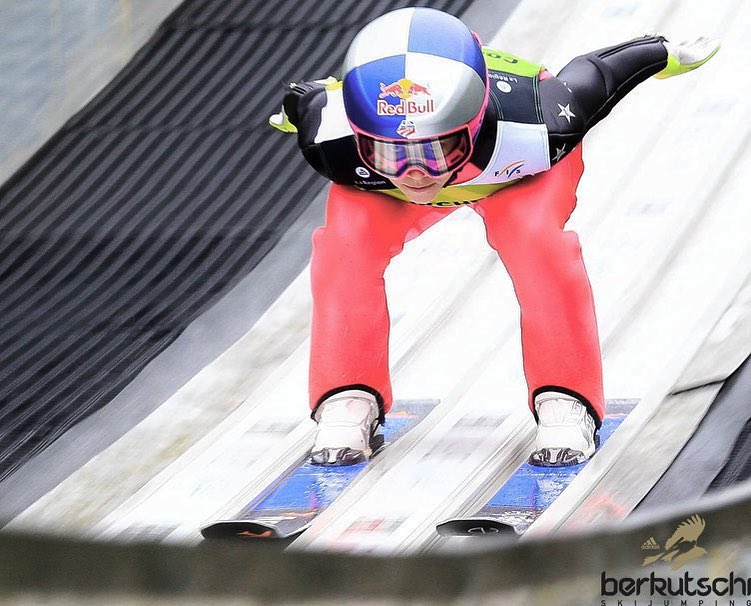 An aerodynamic crouch minimizes drag on the ramp. Image: Courtesy of Sarah Hendrickson

Ski jumpers not only have to contend with air resistance but also friction on the bottom of their skis. The bottom of the skis is a plastic-like material.  Hot wax is dripped on top of the plastic and scraped smooth to minimize friction. Modern ski jump in-runs are equipped with ceramic tracks with an integrated cooling system to keep a stable 20-mm-thick ice layer for the jumpers. However, snow conditions and temperature dictate use of different waxes to minimize friction. There is specific wax for cold weather, warm weather, and even wax designed for storingskis during the off-season. If ski jumpers minimize friction and air resistance on the 35-degree ramp, they will reach speeds of around 90 km/hr (56 mi/hr) at takeoff.

The second section of ski jumping is the table, or takeoff. Contrary to what you may think, the end of the ramp doesn’t go up. In fact, the ski jump has about a 10.5-degree down angle. This means that for ski jumpers to maximize distance of flight, they actually extend from their aerodynamic crouch and jump instead of sliding off the end of the ramp. Timing, strength, and body position on takeoff are key to a successful jump.

The third section of ski jumping, and its most iconic, is flight. During flight, ski jumpers harness the physics of flying like a glider that does not have an engine. This means in order for ski jumpers to fly, they must use the momentum gained on the ramp and control aerodynamic forces. While in flight, they have three main forces acting on them: lift, drag, and weight. Lift acts perpendicular to airflow. As the air hits horizontally in the face of ski jumpers, lift pushes them up in the air and allows them to soar farther down the hill. Unlike the ramp section where ski jumpers try to minimize body surface area hitting the air, during flight section the goal is to use their flat body and skis to push against the air. 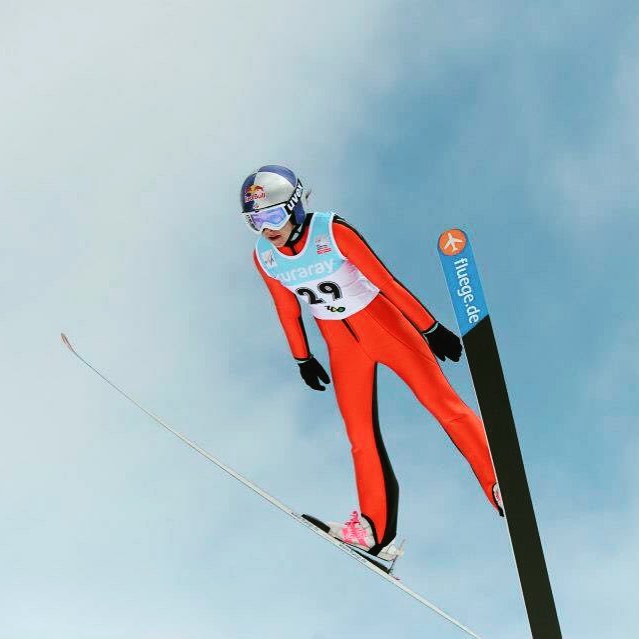 Ski jumpers’ skis, suits, and body position are all designed to increase this in-flight surface area to increase lift. The skis are wider and longer than alpine and cross-country skis. They are 145% of the skier’s height in centimeters and 1.5 times wider than alpine skies. Ski jumpers wear suits that are spongy microfiber that have a regulated amount of air permeability and must be no more than 2 cm (.8 in) away from the body at any point. The ski jumper’s body position has the skis in a V shape and arms slightly away from the side of the torso. This body position, first developed in 1985, produces 30% more lift than the previous parallel ski position. Sometimes ski jumpers will move their arms and hands to realign their flight path and attempt to stay airborne longer.

Weight is the force generated by gravitational attraction toward Earth. Ski jumpers have learned that lighter jumpers fly farther than heavier ones. Ski jumping skis are also very light, weighing only around 7.2 kg (16 lbs). The final force ski jumpers contend with is drag. Just like during the ramp section, drag slows ski jumpers in the air. Drag is an unopposed force that quickly slows ski jumpers down.

Ski jumpers complete their mastery of physics in the final section, the landing.  The landing on which the ski jumpers are judged requires them to move from their V flying shape to skis parallel, one foot slightly ahead, and no more than two ski widths in between. Ski jumpers must master weight distribution and balance to land steadily absorbing impact by bending their knees. Ski jumping skis are designed to be a stable platform for ski jumpers to land on.  The material of the ski actually absorbs some of the impact of the landing.

Ski jumpers are never more than 10 to 15 ft above the ground while flying. They follow the curve of the hill and land 100 m from the end of the ramp. From start to finish, ski jumpers harness potential energy, convert it into kinetic energy, control lift like a glider, realize a millennia-old dream, and do this all with style in less than 10 seconds. 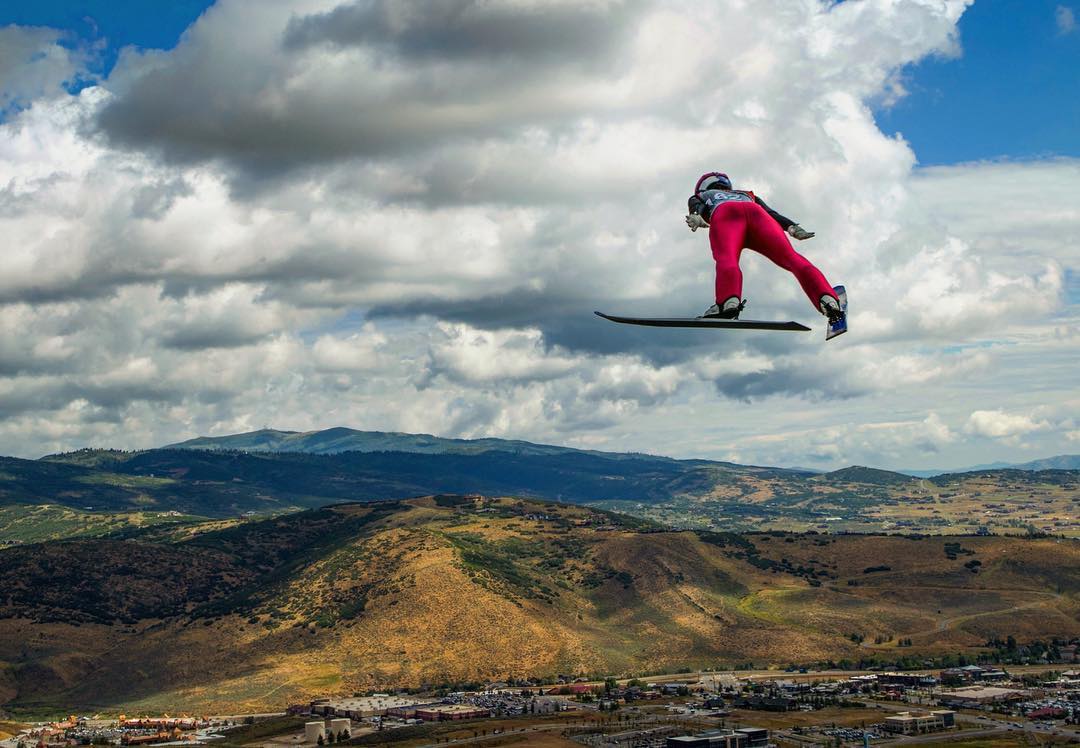 Hannah Osborn is a Publishing Assistant for the Curriculum and Communications division where she is the contact for general operational responsibilities, manages and administers budget, procures vendors and contractors, and supports the writers, editors, and subject matter specialists within the division. Prior to coming to the Smithsonian Science Education Center, Hannah worked in healthcare as a Prosthetist and Orthotist, where she provided braces and artificial limbs to patients. In her free time, Hannah loves to travel anywhere and everywhere. She also enjoys watching and participating in sports, attending theater performances, and being outdoors hiking or camping. Hannah earned her MA from Georgetown University in Liberal Studies and her BA from the University of Michigan in Psychology and Classical Archeology.