Five Things To Know About Biomimicry

The word is difficult to parse. Try this: bio-mimic-ry. Though not so easy on the eyes, the word lucidly explains its own meaning: biomimicry is the imitation of designs and processes found in nature. It asks how we humans can benefit from mimicking the intricate and graceful systems displayed by life forms all over the world.

The concept relies on the fact that organisms have been evolving and improving themselves for billions of years, and in many cases have developed near optimal solutions for confronting the physical challenges presented by living on Earth. As we worry more earnestly and often about how modern technology is a cumbersome imposition on the environment, scientists, artists, and inventors are looking to the natural world to inspire new designs that could imbue human methods of living with more elegance. Here are five topics in biomimicry that are worth time and attention.

As the legend goes, an inventor named Daedalus and his son Icarus were trapped on the island of Crete. With no means of escape, Daedalus designed a new method of transport based on a design birds perfected long ago. He made wings of feathers bound by wax and twine, which he strapped to himself and his son. He mimicked the curvature of a bird's wing and the size order of the feathers. The technology didn't work -- Icarus flew so close to the son that the heat melted the wax and he fell to his death in the sea -- but the important part is that Daedalus created a design based on one of nature's most awe-inspiring successes. Others after Daedalus have marveled at the elegance and incredible functionality of wings. Called by some the most original inventor in the history of the world, Leonardo da Vinci looked to bats' wings to design a flying machine. This particular machine didn't exactly work either, but later inventors streamlined a bird-centric approach to flying: the Wright Brothers based their airplane on the feathered creatures they observed winging in the sky. Generations of engineers have been inspired by the design of wings, and as a result, now humans can fly. 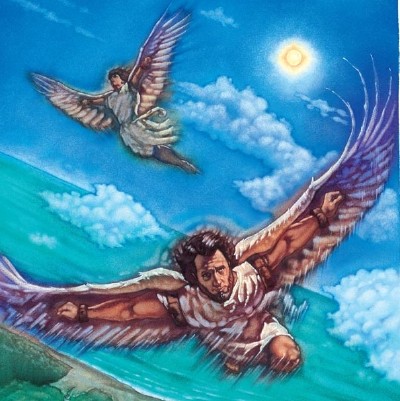 The story of Daedalus and Icarus is an early tale of biomimicry. Although Icarus drowned, the bird-inspired wings carried Daedalus home safely. (Image from here.)

2. Who would have thought that covering one surface in tiny hooks and the other in tiny loops could hold two materials together but still allow them to be pulled apart?

That's a rhetorical question, but it actually has an answer: nature would have thought that, and it did. The idea for Velcro struck inventor George de Mestral when he looked closely at what exactly was making pesky burrs stick to the fur of his dog when they went for walks in the Alps. He was impressed by the burr's naturally constructed miniature hooks, which fasten themselves to any material that is remotely loop-like. It took Mestral years of experimentation to find suitable mechanical methods and materials (like nylon) to create modern Velcro, but the concept behind the design came straight from the burrs. 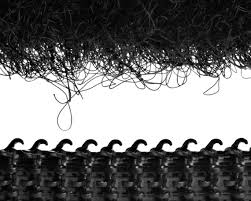 3. Our long-standing coal-burning and electricity-guzzling habits are sending the environment into convulsions.

It's not that we are trying to eradicate the polar bears or burden our atmosphere with poisonous carbon. It's just that we need energy for most of the tremendous modern contraptions we use -- like flights that connect people and machines that evaluate medical problems and the Internet, which makes information public and free -- but we don't have a good, well-designed way to produce it. Nature does, though. Every green plant in the world makes energy from a single source using the same basic mechanism. In leaves, chloroplasts absorb sunlight and, through some simple chemistry, convert it into sugars. The plants grow and survive on the sugars, and we grow and survive on the plants. Their method of energy transformation is efficient, clean, and sustainable. Daniel Nocera and many others in the field of artificial photosynthesis have come up with ideas for artificial leaves, which could potentially be used by individuals to substitute for power plants in providing energy. The invention, based on the design of the leaves you see every day outside your house, could revolutionize modern energy consumption. 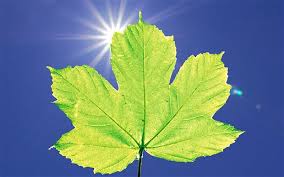 Leaves are able to make usable energy from nothing more than sunlight. Scientists are trying to produce a piece of technology that could photosynthesize like this leaf. (Image from here.)

4. For creatures that are not weightless, geckos are astonishingly good at walking sideways and upside-down on walls and ceilings.

They can achieve these acrobatic feats because of the way their feet interact with surfaces. Covered in thousands of tiny hairs, their toe pads exploit a type of attractive force commonly studied in atoms during chemistry class. These forces are called van der Waals interactions, and they explain how atoms that are partially charged -- some negative and some positive -- can stick together. Although the sticking force of each atom is tiny, an army of atoms working together on a gecko's foot can ramp up enough sticking force to support the animal's weight. Scientists are looking into how we could use this technology for our own sticking needs. Researchers at a lab at MIT are trying to create a robot that, using this design, could scale walls and ceilings. Imagine having boots that would allow you to climb up any surface, no matter how gravity tried to tug you down. I think I'd be off-the-walls excited if I had boots like those. 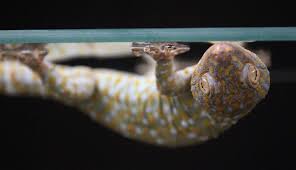 Geckos use atomic-level forces to stick to surfaces, defying gravity. Mimicking their successes could provide us with new technology. (Image by Gus Chan from here.)

5. There are non-organism-specific phenomena in nature that have something to teach us about design.

In her TED talk, science writer Janine Benyus asks us to imagine the amount of coordination involved in creating springtime. All at the same time, life turns over. Flowers open, bugs mate, birds sing, trees sprout leaves, soil warms, pollinators pollinate. This happens without any form of top-down management or oversight; no one force controls every organism's springtime routine. Benyus asks us to imagine how scientists and inventors could take the organizing principles behind such an enormous event like the coming of springtime and apply them to organizational problems in the human world. 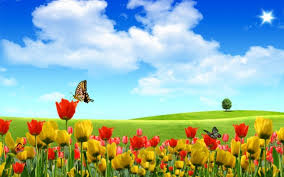 The coming of spring is an unbelievably well coordinated event among soil, flowers, trees, insects, birds, clouds, sun, and more. Nature's principles of organization might be something we can imitate. (Image from here.)

The list goes on and on. Worms could inspire an adhesive for use in medical situations. Super strong spider webs could be reimagined as parachute chords. Termites could stimulate ideas for new types of air conditioning. Studying butterfly wings could yield a new approach to optics. Echolocation in bats could be used in a cane for the visually impaired. Beetles could be studied to obtain new methods of water capture in deserts. The dizzying list of potential inspirations is inspiring.

Perhaps biomimicry's best attribute is that it prompts us to acknowledge natural selection as the world's consummate designer. In basing our technology on nonhuman genius, we bow to the power of evolution as a force that injects improvement into every inch of every life form. It's a force that doesn't stop working until the optimal design has been attained. And although it has already created scores of designs worthy of reverence and imitation, natural selection carries on improving the world.