Findings from science education research rarely make their way into classroom practice. As I've discussed before on the PLOS Sci-Ed blog, there are a lot of entrenched barriers that continue to separate these efforts. For one, most science education research is still primarily published in journal articles that are often difficult to access -- and always dense, lengthy reads. Additionally, teacher professional development (PD) workshops, often developed in conjunction with researchers and intended to bridge this gap, are costly and time-intensive to implement. While these programs are often important and meaningful experiences, logistics still limit their reach.

Ever since I first got involved with science education research, I have been increasingly disturbed by this disconnect. That's why I was incredibly excited when our Associate Director of Curriculum and Communications here at SSEC, Marjee Chmiel, approached me with the preliminary plans for the Good Thinking! project. 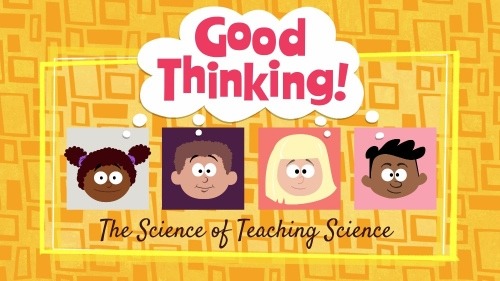 The basic concept was to create short, animated web videos for teachers about research findings on common student misconceptions and other pedagogical topics. Marjee and I had both been inspired by the film A Private Universe and research on student mental models and conceptual change. We had also seen Phil Sadler's recent findings showing that students of teachers who had both strong content knowledge and strong knowledge of student misconceptions learned more than students of teachers who only had strong content knowledge. Clearly there was a need for PD that helps teachers understand common student ideas and how to work with these ideas in building a more scientific understanding.

I was already familiar with what many of the most common student ideas were, as I had spent many years working with the team at AAAS Project 2061 developing and researching misconception-based assessment items, conducting literature reviews, student interviews, and analyses of written responses. Marjee had done her dissertation on how science teachers use video to share ideas, and was already formulating a script for a video on the basics of conceptual change theory. We were eager to get started!

However, any animation project is a huge undertaking and we needed a team. Soon we hired a Series Coordinator, Nate Fedrizzi, a conservation biologist with a background in science media, and began lining up content writers and subject matter experts (some of whom had contributed to the research we cited).

We contracted with FableVision, a Boston-based studio, to create the animations for the series. Under the passionate direction of Creative Director Leigh Hallisey and Producer Danielle Gillis, this quickly blossomed into a wonderful creative partnership, and each episode now benefits from the unique perspectives of both science and education writers and animation and entertainment writers.

Teachers Can Have Fun Too!

Yes, they're animated. And yes, they're for teachers! Unfortunately in the current policy climate, teachers have a pretty thankless job. There is always "one more thing" being added to their list of responsibilities, and professional development often means taking time out of their summer, or else struggling to find a substitute. Good Thinking! is meant to be respectful of teachers' time, and to bring a little bit of humor into their days. But beyond being fun, we think animation can be a surprisingly effective medium.

Another inspiration for our work came from the research of Derek Muller, a science educator and creator of the massively popular Veritasium series. He summarized some of his findings in a video called "Khan Academy and the Effectiveness of Science Videos". He found that "content explainer" videos are less effective at teaching new concepts than "dialogue" or "refutation" videos, which explicitly include and address common student misconceptions or perspectives and work through why those ideas are inaccurate or need refining.

As Nate mentioned in an earlier STEMVisions post, digital technologies have the potential to move beyond traditional lecture-based approaches. We envisioned animation as an opportunity to visualize something teachers can only dream of -- the inside of their students' brains! (A scary thought perhaps, but one with real pedagogical value.) By using this conceit we can convey research findings on common alternative mental models, and then use narrative -- a story about the focal teacher and her students -- to work through the finer points of uncovering and addressing them in the classroom. We also use animation to explore scientific phenomena that are too big, small, fast, or slow to demonstrate with live filming, like the causes of the seasons, or the relationship between cells and atoms.

As far as we know, Good Thinking! is the first substantial effort to translate science education research findings from journal articles into an animated format. Our team, and the teachers we've worked with so far, are very excited about the result, but we also recognize that this series is an experiment. We look forward to receiving feedback and hope to have the opportunity to refine our process and develop more episodes -- the list of important topics and useful findings is always growing!