How Nature Keeps Cool and Handles the Heat

What’s the weather like right now? Let me guess, you just glanced out a window? Or maybe you consulted the meteorologist in your pocket. Either way, odds are most people reading this won’t be outside. After all, Americans spend 87% of their time indoors. As a result, the weather is much less a constant concern of ours than a welcome reminder that nature still exists beyond our buildings.

Humans are great at creatively conspiring against Earth’s elements, and the temperature is no exception. In addition to buildings, we’ve invented clothes to cover ourselves, thermostats to tinker with the temperature, and numerous other nature-numbing devices that solve the challenge of changing climates.

Other animals resort to less techy but equally as innovative ways to deal with daily fluctuations in temperature. They have to because bodies as big as a buffalo’s, as small as a sand crab’s, and everywhere in between all have an ideal operating temperature. This homeostatic hindrance limits our behavior a bit but also allows animals to eat, digest, grow, mate, and play. So it’s safe to say that we get along just fine with it.

The many ways that animals handle hot and cold are acts of thermoregulation. It’s something that we’ve all got to do because everything, including living organisms and lifeless objects, loses/gains heat to/from its surroundings through convection and radiation. In other words, if something is hotter than what surrounds it, it’ll get cooler by losing heat to its surroundings, and vice-versa. So to intentionally maintain a specific internal temperature, living things have to manage how much heat they’re losing or gaining.

In nature, it’s easy to see examples of animals altering their exposed surface areas to regulate their body temperature. One example is birds, which often sleep with their heads on their backs. In the photo below, a Swallow-tailed Gull from the Galapagos archipelago is napping on a windy shore. The cool sea breeze makes the surrounding air colder than her toasty internal temperature. So she’s tucking her beak into her feathers to minimize exposed surface area and stay warm. 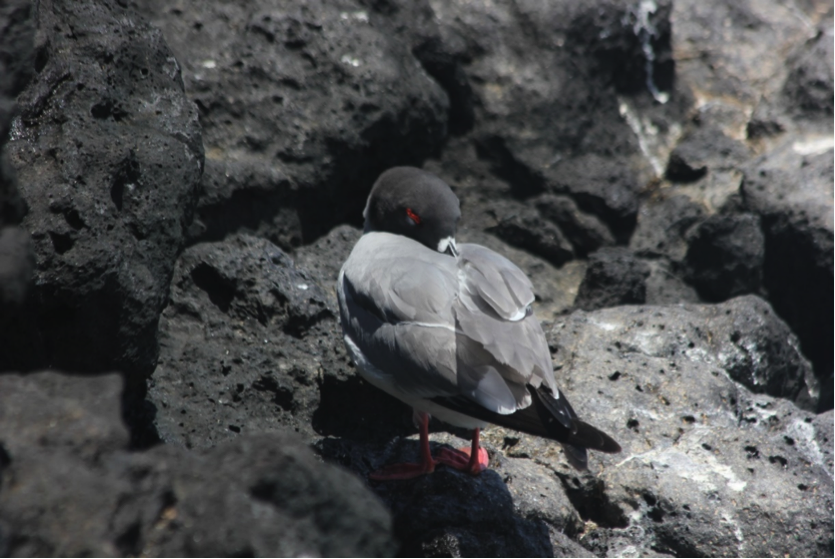 A nocturnal Swallow-tailed Gull sneaks in an afternoon nap, purposefully placing its beak atop its back and under its feathers to rest its neck and stay warm. Photo by Matthew Williams

On another island in the archipelago it’s warmer by the sand, so it’s easy to spot Marine Iguanas stretching out after going for a swim. Their diet requires them to dive for algae, but being in the chilly water lowers their body temperature. So they spread out when they return to the shore to maximize their exposed surface area. This lets them make the most of the Sun’s warming rays. 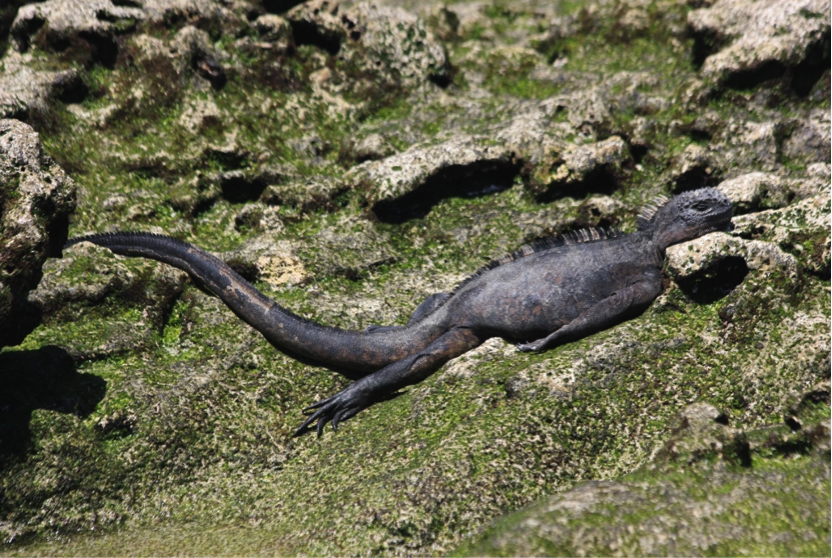 A Galapagos Marine Iguana basks in the Sun to warm up after diving for food. Photo by Matthew Williams

Meanwhile, the Hybrid Iguana sticks to some shade to stay cool. Iguanas and other reptiles are poikilotherms (cold-blooded), which means they rely on the Sun to warm their bodies when they need to do things like hunt, eat, or potentially run/slither away. This is why snakes bask in the Sun after a snack. They’re syphoning its solar energy to help them digest the tasty treat.

In this guy’s case, however, he’s on island time. By staying in the shade when he doesn’t have anything to do, which is almost always, he can keep his metabolism low and save his stored energy for when he needs it most. 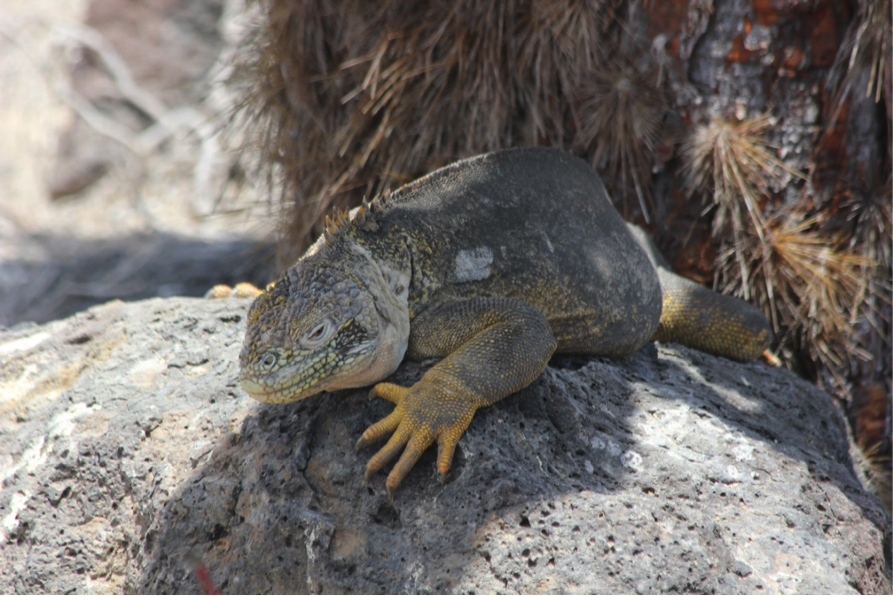 A Galapagos Hybrid Iguana stays cool by sticking to the shade. This species is different than the black Marine Iguana. Hybrid Iguanas spend most of their time on land but can occasionally be seen swimming, hence the term “hybrid.”. They’re endemic to the Galapagos archipelago, where they’ve only recently evolved, so you won’t find iguanas like this anywhere else in the world! Photo by Matthew Williams

Some cold-blooded species have the opposite problem. Take this tiny Lava Lizard as an example. He’s constantly busy hunting insects and avoiding hungry hawks, so he needs to keep his internal body temperature as hot as possible. Because he’s a poikilotherm, he relies on the Sun to do this. So, he selects a dark rock in a sunny spot and then attempts to maximize his exposed surface area by stretching out (while also keeping an eye out for approaching hawks, of course). 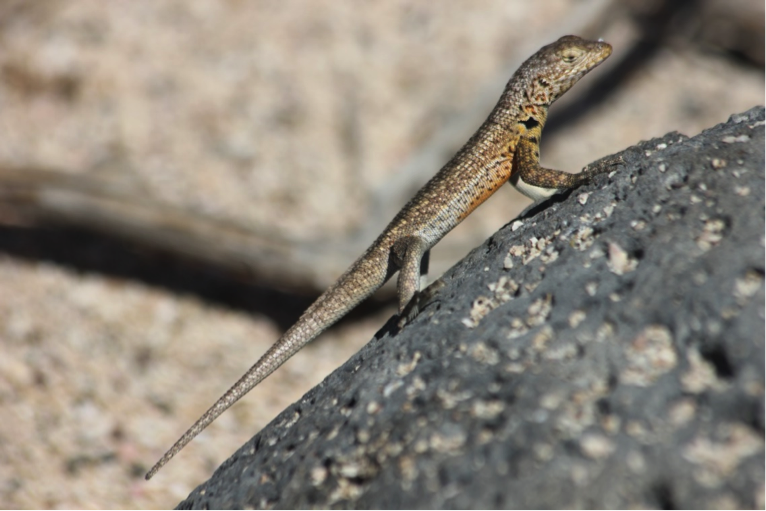 A linear Lava Lizard attempts to heat himself up as much as possible. Because there’s such strong predation pressure on some islands in the Galapagos archipelago, some Lava Lizard populations are evolving darker pigmentation that makes them tougher to spot while they wait for their bodies to warm up in the Sun. Photo by Matthew Williams

And finally, for those who aren’t afraid to get their feet dirty, there’s also the option to take a midday mud bath. Scientists still aren’t sure why Galapagos Giant Tortoises do this, but one hypothesis is that it helps them cool off. Others suggest that it might be keeping insects and harmful bacteria at bay, or maybe, like most of us, they just enjoy it as an easy opportunity to relax or play.

Two Galapagos Giant Tortoises taking a habitual, midday mud bath. While it’s tough to tell in the pictures, these tortoises are as large as a coffee table and weigh upwards of 200 pounds! They are truly remarkable creatures! Photo by Matthew Williams