Laser I3 Summer Professional Development Prepares for Sustainability in Houston

Over the past four years, the SSEC has immersed itself in a $35+ million U.S. Department of Education Investing in Innovation (i3) grant: the "LASER i3" project. With a full-time team of roughly 8, the SSEC has been implementing its approach to science education (the LASER model) in 125 schools across northern New Mexico, North Carolina, and Houston, Texas.

While roughly half the schools have actively taken part in all aspects of the SSEC's LASER model -- from taking part in Strategic Planning Institutes (SPIs) to receiving science materials and teacher training -- the other half has been carrying out their science programs as usual. All the while, the Center for Research in Educational Policy (CREP) at the University of Memphis collected data in order to validate the program ... What are students learning? Do attitudes differ between the schools? What works and doesn't work? The schools the SSEC has actively worked with over the past several years are classified as "Phase 1" schools, and the schools that have been involved in the research component only are classified as "Phase 2" schools. 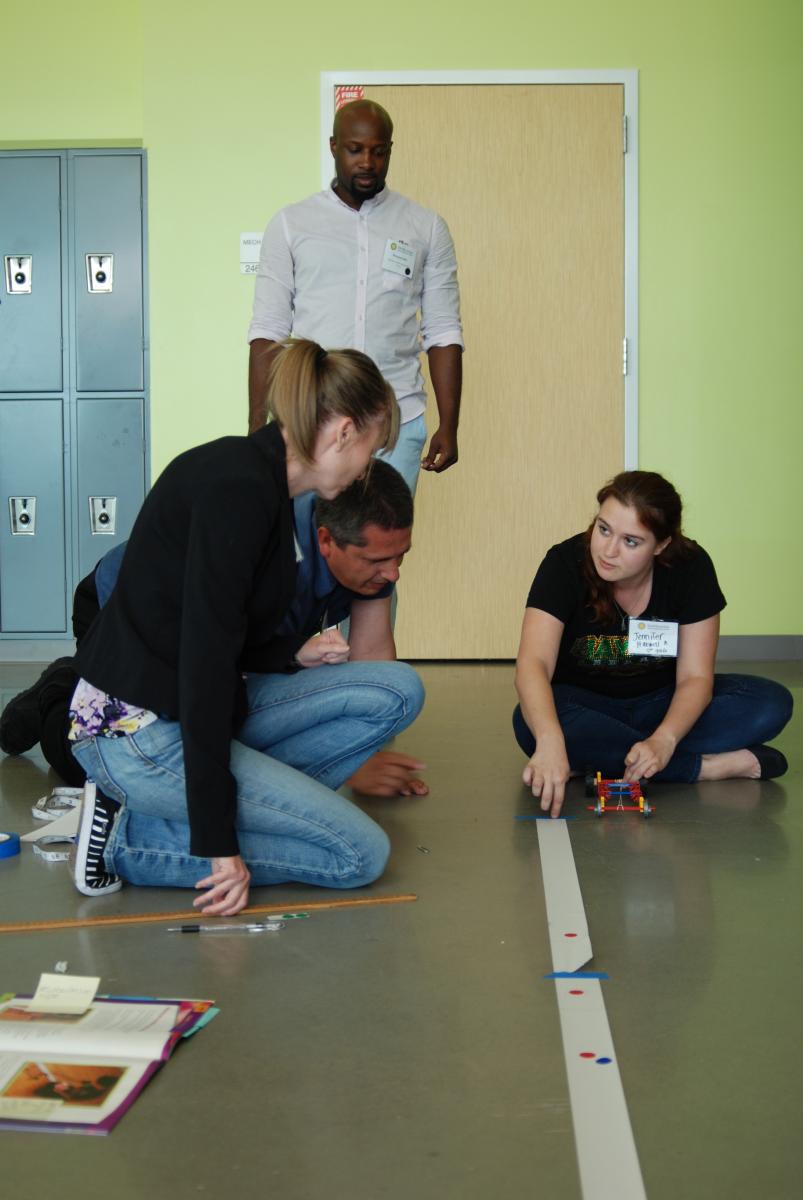 One of the main goals of the LASER i3 program is to sustain the program within the regions. And, even though the 2014 -- 2015 school year marks the end of the funding period, nearly 500 Houston teachers representing 49 Phase 1 and Phase 2 Houston Independent School District (HISD) schools dedicated part of their summer break to bettering their science teaching this summer. The sense of possibility, dedication, and excitement was palpable among the science teachers.

"LASER i3 has actually shown me how to [teach] and what students could learn, " said HISD teacher Linda Simmons. "I believe that my students deserve the best that I can give them ... I am glad that I was equipped with tools to prepare me for that." 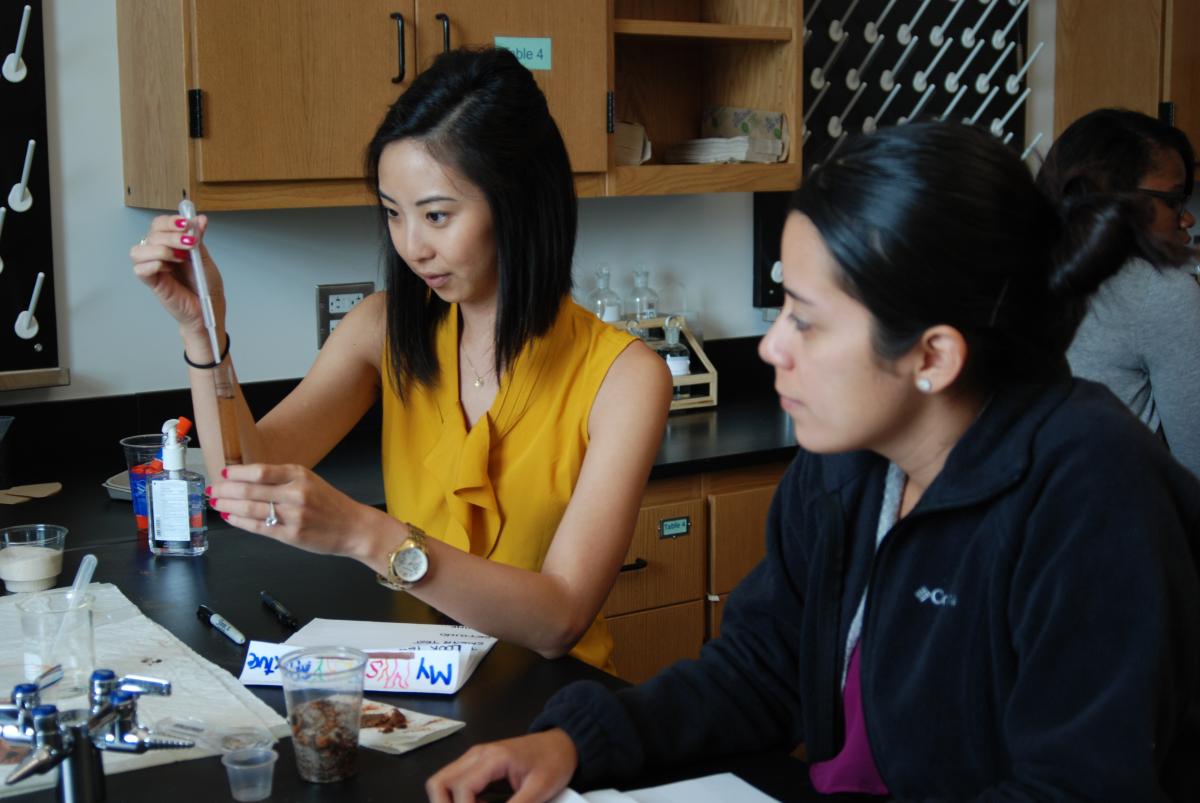 Two first grade HISD teachers mimic what their students will do during the Level 1 Soils training.

"[In Level 2 training], teachers are able to ask more questions and confront the own misconceptions in a judgment-free learning environment," said co-facilitator and HISD middle school teacher Benjamin Glover. "Since teacher knowledge and skills have a direct impact to students knowledge and skills and thus achievement, I believe most of our teachers leave the sessions feeling like they be better address their students needs."

During the second half of each week, Phase 2 teachers took part in "Level 1" training where they learned the ins-and-outs of a new STC Unit that they would implement this coming school year. To support the Level 2 training, at least one Houston teacher and district-level Teacher Development Specialists (TDS) took the reigns a co-facilitator in each classroom. These Houston regional leaders took part in WestEd's train-the-trainer program this past spring and were well respected and received by their colleagues.

Co-facilitator and Elrod Elementary teacher JaShika Bivens explained that the LASER i3 project has contributed to her personal and professional growth.

"My ultimate goal is to encourage and build capacity in teachers, while building excitement for learning and minimizing the achievement gaps for students," said Ms. Bivens. Adding, "It is my hope that other educators are given the opportunity that has been so graciously afforded to me." 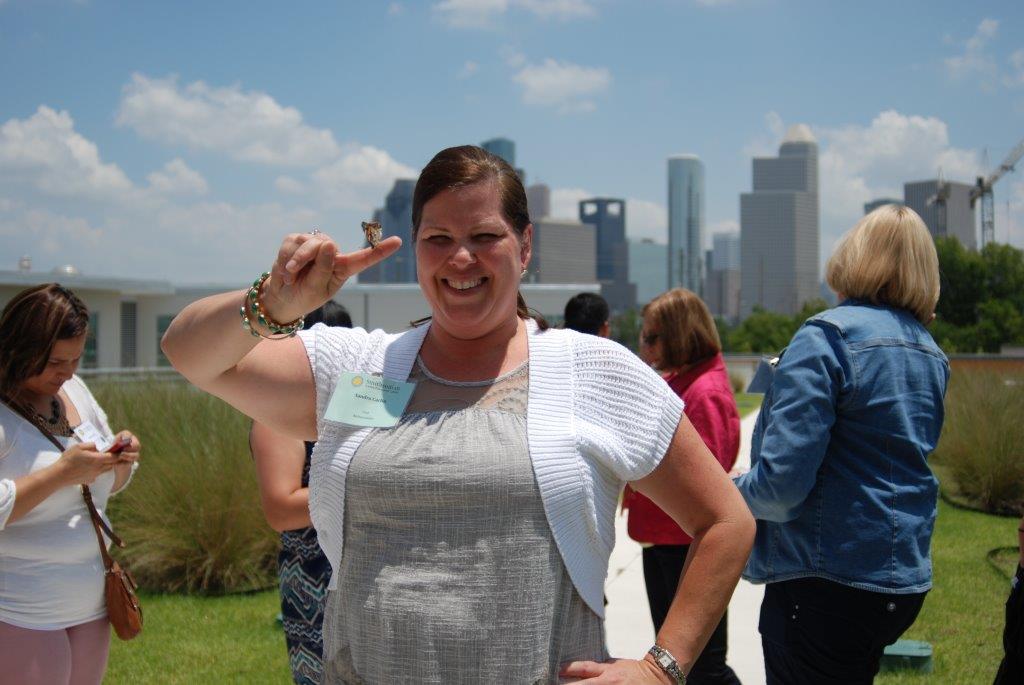 A painted lady butterfly rests on the finger of HISD teacher, Co-Facilitator, and Ambassador Sandra Carlin.

Recognizing the commitment and enthusiasm among the Phase 1 teachers, the SSEC recruited Phase 1 teachers to assist in the Level 1 training. Armed with pacing calendars, standard alignment guides, and student notebooks, these Phase 1 teachers, aka Phase 1 "Ambassadors," took an extremely active role in the Level 1 classrooms. Many of the veteran trainers commented throughout the week that having an Ambassador in their classroom heightened participant's engagement, comfort levels, and enthusiasm with the STC Units.

Some Phase 1 teachers, like Barbara Bush Elementary teacher Rose Ennis, has been with the LASER i3 program from the beginning. She, like some of her colleagues, just completed her fourth summer of professional development. "The professional development I received in Solids and Liquids, Soils, and Organisms was outstanding and prepared me to teach my first graders the science concepts at a more in-depth and significantly higher level than I had done in the past," said Ms. Ennis. Adding, "I, as well as the other science teachers receiving the training, [can say that this training] greatly contributed to a heightened interest in science among our students that will stay with them for the rest of their lives."