The perfect slide: The science of bobsledding

In the 2010 Olympics, both the men’s and women’s two-man bobsled gold medals were decided by less than two-tenths of a second. Each team had taken four runs down a 1,450 meter (almost 1 mile) track, and the combined times were separated by less time than it takes to blink. So in a sport won by speed, what does it take to have the perfect slide on a bobsled run?

There are 16 bobsled runs in the world, and all but one of these is made of reinforced concrete covered in ice with internal artificial refrigeration. The ice on the run varies, however. Weather conditions such as rain and snow and varying temperatures change the consistency of the ice. The colder and harder the ice is, the faster for the sleds. Warmer, softer ice is generally slower. Track maintenance crews also keep the track fast by repairing damage caused by the sleds. They apply ice slush to the track, scrape it smooth, and then shave any high or low areas with a razor to keep the ice smooth and fast. 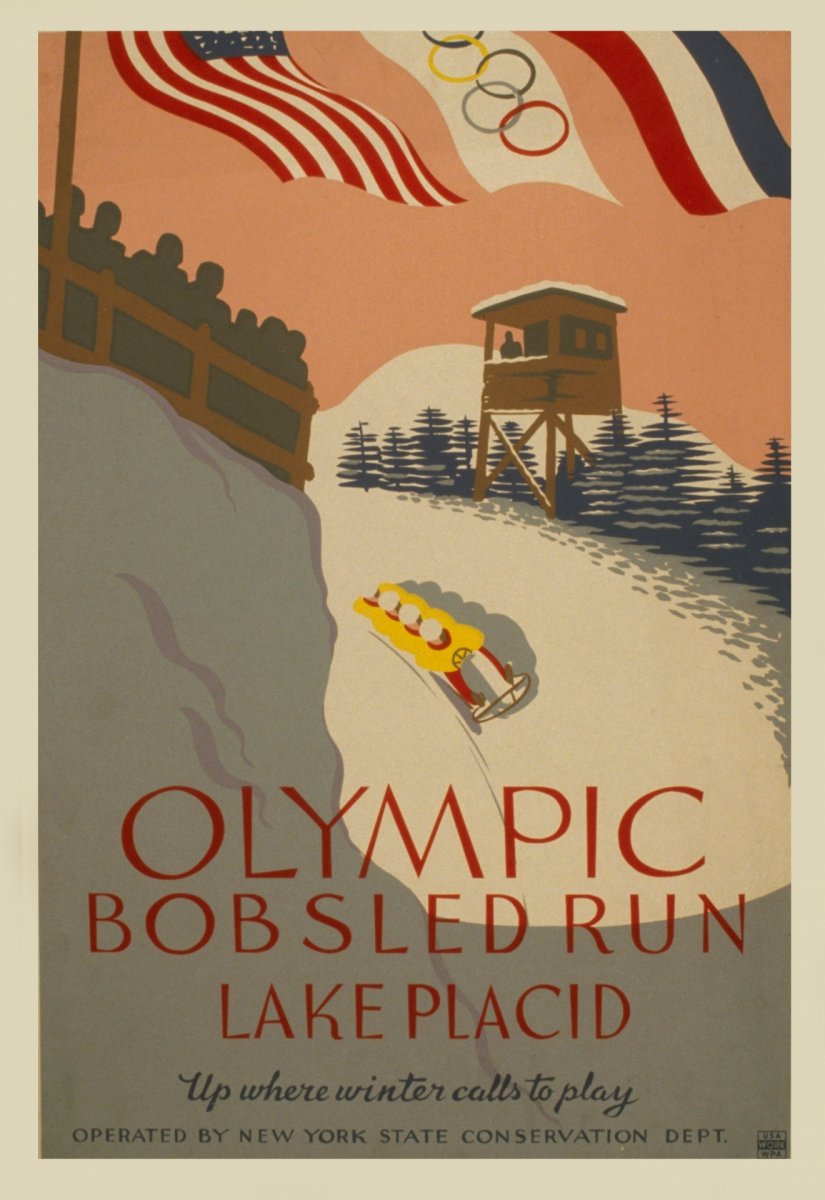 Lake Placid, New York, has one of 16 tracks in the world and has hosted the Olympics twice. (Wikimedia public domain)

The second component of a perfect bobsled slide is the equipment. The sleds are built for speed and efficiency. They are lightweight but strong enough to hold two or four large athletes traveling 135 km/hr (84 mi/hr) with 5G forces in some turns. Aerodynamics is key to minimizing the drag force slowing the sleds. Team USA bobsleds are designed by some of the best in aerodynamics, BMW and NASCAR great Geoff Bodine. They are tested, adjusted, and re-tested in wind tunnels to minimize drag forces during the run.

Minimizing drag is only half the challenge. Bobsleds also need to maximize acceleration. Acceleration is dependent on weight and its distribution in the sled. Weight limits for bobsled competitions are set so that each team has the same mass. The difference is in how the weight is carried in the sled. Bobsled manufactures use lighter carbon fiber materials for the shell, which puts most of the weight lower. A lower center of mass allows sleds to handle better through the turns. 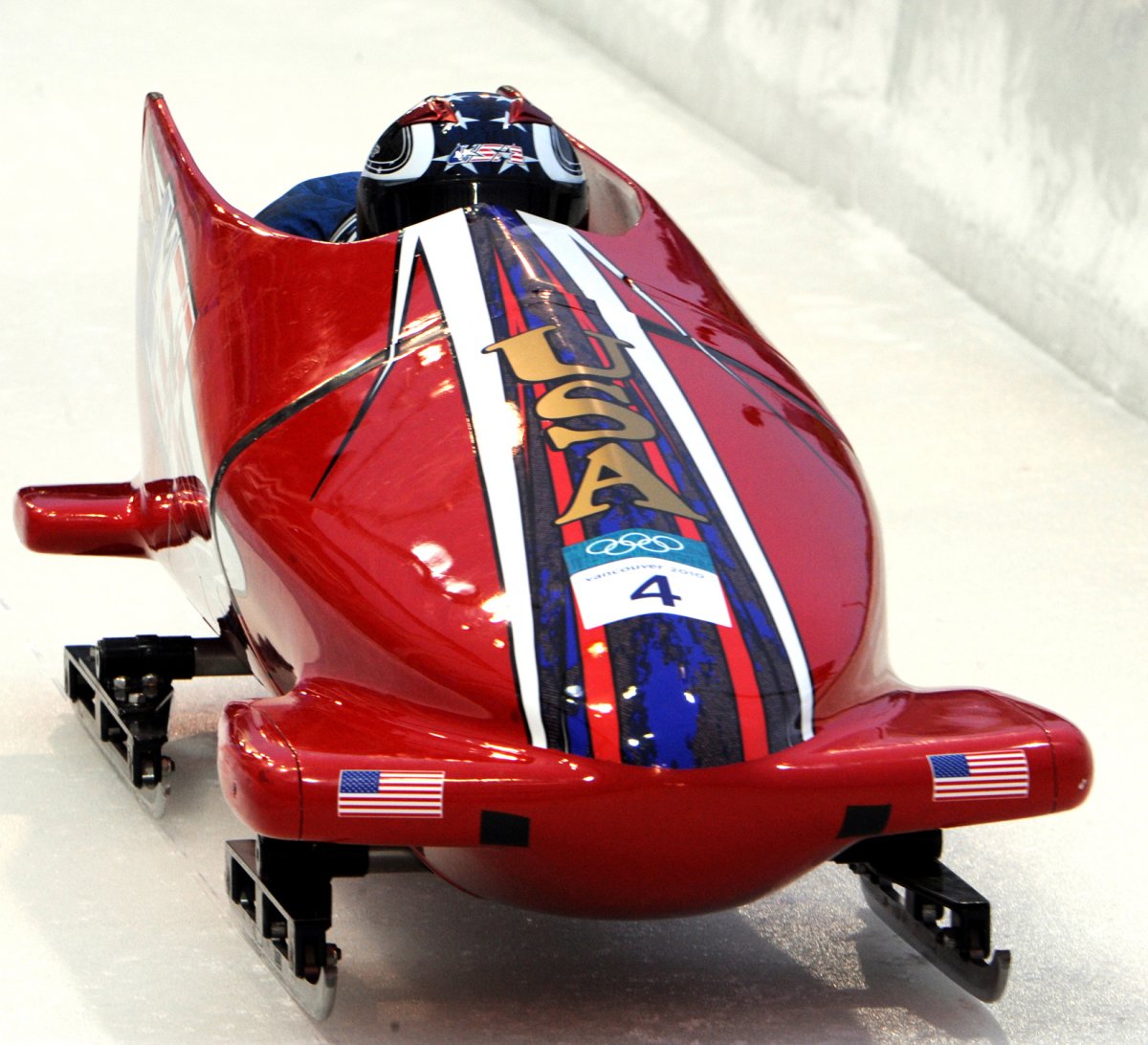 The sleds are aerodynamic and have a low center of mass for better speed and handling. (Wikimedia public domain)

Another sled component that controls the handling and is important in minimizing forces that slow the sled are the runners. The runners are the metal blades that touch the ice similar to ice skates. Runners are coated and polished to minimize friction.

When it comes to maximizing acceleration and minimizing forces that slow the sled, the team is the largest variable. According to Newton’s second law, acceleration is determined by mass and force. The mass is standard for all the teams, but the driver and push athlete, or athletes, are the force. This force acts at the start where the athletes must first overcome static friction to move the sled weighing between 170 kg and 210 kg (375-463 lbs). Using spikes on their shoes to run on the ice and timing to coordinate the push, the bobsled teams have 50 meters (164 feet) to push the sled to 40 km/hr (25 mi/hr).  Stronger runners are able to push the sled faster than weaker runners, so some teams have Olympic sprinters as push athletes. The start is the only time in the run that an accelerating force other than gravity, which accelerates all the sleds at the same rate, will act on the sleds. A bobsled team can carry speed advantages from the start throughout the course. 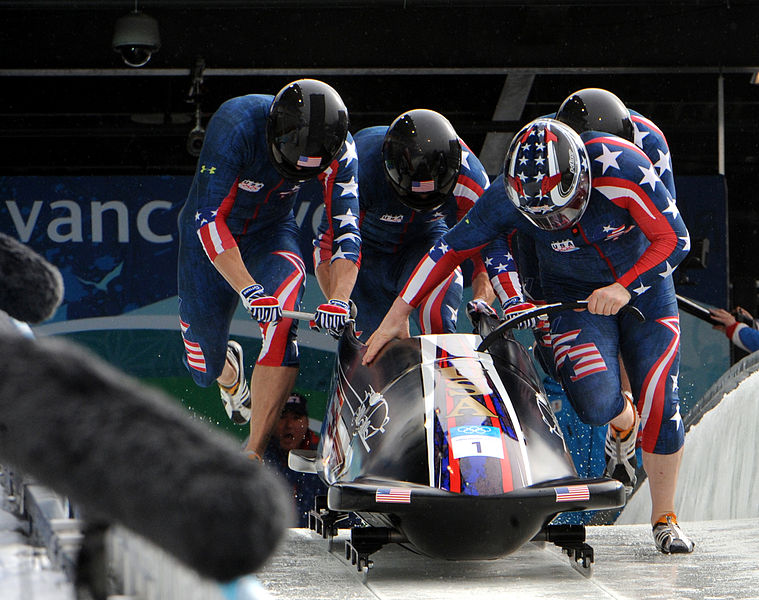 The bobsled team must conserve the acceleration they gain in the start. The push athletes do this by remaining in a tight tuck behind the driver and staying aerodynamic. They also shift their body weight to help steer, a back-and-forth bobbing motion that gave bobsled its name. The driver is responsible for using two rings attached to the steering system to turn the sled’s runners in the track’s turns. Turning the runners effectively makes them sideways with respect to the direction of the sled, which slows it down. The driver’s goal is to find the perfect line while turning as little as possible during the run. The perfect line is keeping the sled high enough in turns to maintain speed but low enough to avoid traveling a longer distance all while avoiding scraping the sides of the track.

Smooth ice, cold temperatures, an aerodynamic sled with a low center of mass, polished runners, a strong start, and clean driving with few adjustments are all important variables in bobsled. When they are all perfect, the team can achieve the perfect slide.