The Science of Rainbows

Summer's over, but birds are still chirping, and the Sun is still shining! Well… sometimes at least. It was a rainy summer here in Washington, DC, but with rain comes prime conditions for one of nature’s greatest shows: rainbows! The majestic, multicolored bows of light that lead to pots of gold and appear after rainstorms as if by magic—except it’s not magic, it’s physics! It might seem intimidating to unravel the secret of rainbows, but it’s actually really simple and so rewarding!

First, here are a few facts. All light (in a vacuum) moves at something called c, or the speed of light, which is equal to 3 x 108 meters per second. To put that in perspective, cars on a highway move on average only 3 x 101 meters per second! So light moves fast; in fact, it’s the fastest anything can possibly move—the cosmic speed limit! Here’s where it gets interesting though. Light doesn’t always move at c. In air, or in space, this is how fast we measure light to move, but when light passes through other materials like water or glass (known as mediums), the speed can change and slow down. Keep that in mind as we move forward. The second thing we need to know about light before we get to rainbows is that the light we experience from the Sun is something known as white light. White light is composed of all different colors (red, orange, yellow, green, blue, indigo, violet) that the human eye can see. This kind of light is known as visible light because we’re able to see it with just our eyes alone. We say visible to differentiate between other kinds of light that we can’t see, for example ultraviolet or infrared (yup, that’s light too!), which are also present in white light. We can disregard the non-visible light for now and come back to that another time. These visible colors all have unique characteristics known as wavelengths. Going from red through violet the wavelength goes from greatest to smallest. It’s this wavelength that will determine how the different colors react when they go through a medium (for example a raindrop).

Image from bouldercast.com depicting light inside the raindrop

Okay! We’ve got all of our pieces, now it’s time to see how they come together. Let’s think, what makes prime conditions for seeing a rainbow? You definitely can’t see it during the rainstorm because clouds block most of the light. You also can’t see it long after a rainstorm, because then all of the water vapor in the air has evaporated. The best time to see a rainbow is just after a rainstorm has ended! We need both water droplets and sunlight for the spectacle to take place. Remember the other mediums I mentioned? That’s exactly what our rain droplets are. When white light from the Sun passes through the raindrops the behavior of the different colors change from all going c to a speed proportional to their characteristic wavelength (red moving fastest and violet moving slowest). In other words, the white light scatters into all seven different colors! This scattering is what we call refraction. After scattering inside the rain droplet, the light bounces (or reflects) once until it finally exits the droplet and a rainbow is created! In fact, two rainbows are created! Even though it’s usually faint there’s always a second rainbow just above the first. Notice that the colors will be inverted from the original rainbow; that’s because these light rays have undergone a second reflection inside the droplet! 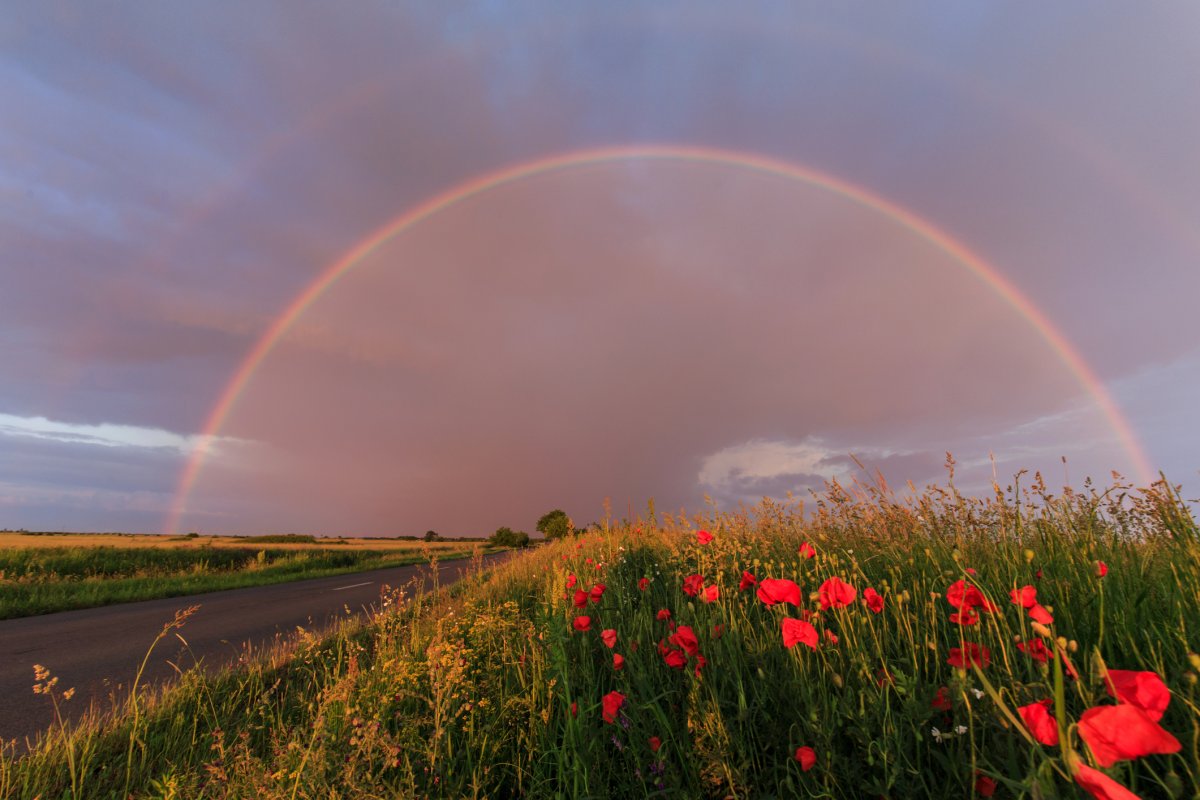 There you have it, magic revealed as science in disguise! Can’t wait for the next rainstorm to test this out for yourself? No problem! All you need to do is get a glass prism and let the light from the window or a strong light source shine through it and watch as the colors separate before your eyes! You can even do what I did: set up the prism by your bedroom window and wake up each morning to your own personal rainbow.