Yes, you read that right. As 21st century humans, we get to enjoy all the perks of modern technology. That includes digital money, music in your pocket, intercontinental travel, and now, possibly, de-extinct species. Last month, a team from Germany considered the legal implications that such species-level innovation might have in a perspective from the journal Science. The discussion comes at an important time, as recent advances in the field have made the idea of de-extinction increasingly feasible. 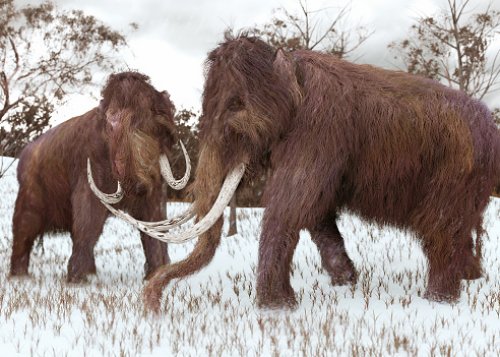 It has been nearly 10,000 years since Woolly Mammoths this large lived on Earth. The last mammoth populations died out only a few thousand years ago, but these island-bound groups had evolved shrunken statures and warm weather adaptations, making them somewhat different than their Woolly cousins. Image: Aunt_Spray/iStock/ThinkStock

In 2013, the first-ever TEDx DeExtinction was hosted in Washington D.C. One of the presenters was Geneticist George Church, whose Harvard-based team has been working since 2015 to revive & restore the Woolly Mammoth. Their method, one of three ways to ‘de-extinct’ discussed in the article, involves a mix of genetic engineering and cloning.

Using CRISPR-Cas9, a technology for removing and inserting genes, they copy DNA from an ancient mammoth genome and paste it into living elephant cell cultures. The aim is to see which archaic traits they can introduce into cloned Asian Elephants. Among the list of important candidates are genes related to the oxygen-carrying capacity of red blood cells, the insulating qualities of fat, and the mammoth’s characteristically-thick hair.

So far, their efforts have been successful, and according to the project’s website, true cloning attempts can begin by 2018. Getting from there to the first “mammophant” footprint might still take a while, but successfully generating Asian Elephant embryos with genetically engineered mammoth DNA is one of the last hurdles for scientists to overcome in this process. This makes considering the ethical and legal implications of de-extinct species exigent. 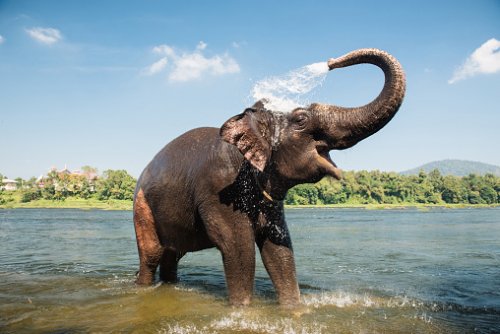 Embryos of cloned Asian Elephants, like this one, could soon be genetically edited in attempts to recreate the Woolly Mammoth. Image: Gilitukha/iStock/ThinkStock

The first topic at hand is figuring out how to name them. What we call a species determines the level and type of legal protection that it gets. For example, in the case of the revived Woolly Mammoth, whether we classify it as a sub-species of the Asian Elephant (which is endangered) or a new species entirely will have a substantial impact on preexisting conservation efforts.

On one hand, grouping it with the Asian Elephant could dilute current attempts to protect already-dwindling populations. On the other hand, naming it something new warrants the question of whether a species with no recent evolutionary history deserves the same legal rights as a ‘natural’ species.

The new Woolly Mammoth’s founding population, which some are considering releasing onto the Siberian tundra, would be small enough to initially classify as endangered, but doing so would reallocate existing support away from other species that desperately need it.

Additionally, another paper from the journal Nature, published this March, argues that money spent on de-extinction efforts reaps less of a return than other attempts at biodiversity preservation. In other words, if our goal is ensuring that the Earth remains home to a diverse suite of species, de-extinction research is not a worthwhile investment. We’ll get a far better return on our money if we spend it saving the species that’re still living. 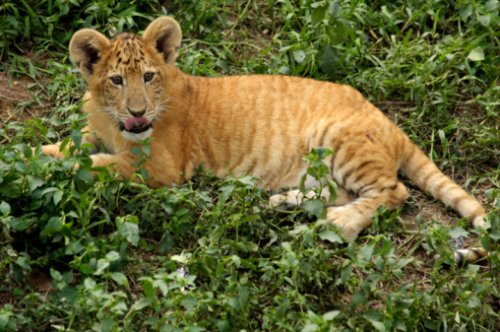 The Liger is the offspring of a male lion and a female tiger. They’ve occurred many times in captivity, and consequently, they’ve long been a cause of confusion regarding what a ‘species’ actually is. Image: LambertDavid/ iStock/ThinkStock

Another challenge on the table has long been a thorn in the side of modern biologists. It’s the question of what a ‘species’ really is. According to the biological species concept, it includes all individuals that can interbreed. This definition usually works well, but hybrid species like Ligers blur the boundaries. If we know that lions and tigers are capable of interbreeding, can we still consider them separate species?

The issue of defining a species comes to the foreground when considering the second method the article discusses for reviving an extinct species, which involves back-breeding individuals from a closely-related, current population. This means that members of a living species with a shared evolutionary past are selectively bred to bring out traits from the extinct species. An example of this approach is the case of domestic cattle (Bos taurus), which have been back-bred to bring out traits of the extinct aurochs (Bos primigenius).

In this case, the de-extinct population (Bos primigenius) can still interbreed with the modern one (Bos taurus), so they are not a separate species according to the biological species concept. But according to another definition known as the phylogenetic species concept, they could be. This paradigm ignores interbreeding and states that all individuals with a unique, derived characteristic are a species.

By this logic, aurochs differ from domestic cattle enough for them to be considered a separate species. But biologists are still debating over which definition they like best. Some see more value in the phylogenetic concept, while some prefer the biological concept. As a result, there doesn’t seem to be much classification clarity in sight, and it remains unclear what exactly a species is.

Before making things simple again, it’s also important to consider what exactly a de-extinct species would be. Even if we bring back the Woolly Mammoth, it still won’t be a true Woolly Mammoth.

While much of what makes an individual comes from their genes, researchers are rapidly discovering the hereditary role of extra-genomic factors like learned behavior, epigenetics and the microbiome. These traits are passed directly from mother to offspring, but the embryo of a de-extinct species would have to be grown ex vivo (outside a living body), or in a surrogate mother from some different, living species. This means that its extra-genomic factors would differ from the last legitimate member of its long extinct lineage, and as a result, the de-extinct species would likely behave differently as well. 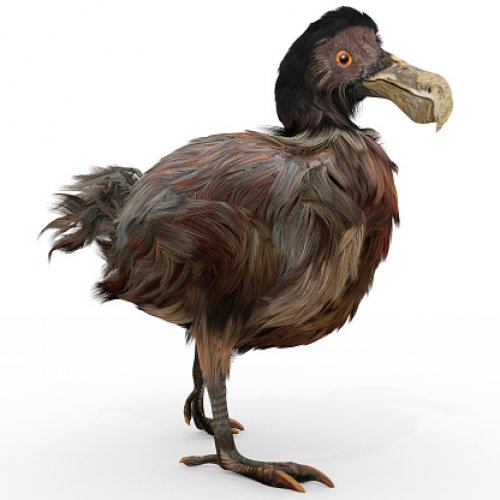 Getting to meet the extinct Dodo, like Lewis Carrol’s Alice did in Wonderland, might not stay a fantasy for too long. Image: Aunt_Spray/iStock/ThinkStock

However, even if a 21st century Woolly Mammoth is a little different than its ancestors, it’s tough to argue that watching a species long-lost to the past walk on Earth once again wouldn’t be spectacular. Imagine going to a zoo to see a revived Irish Elk, with antlers stretching 12 feet across; or visiting a national park to meet the Mauritian Dodo, previously extinct since 1662, as it feeds from around your feet.

Where things sit now, we are in good shape, as de-extinction experts have already begun to consider the ethical implications of their work. In Jurassic Park, a movie that may soon appear to children as non-fictional, Ian explains that the “scientists were so preoccupied with whether or not they could, they didn’t stop to think if they should.” This ‘soft-science’ step, be it regarding nuclear energy, inter-galactic exploration, or de-extinction, is just as important as the experimental procedure itself.

Stopping to ask why we are doing something, what it could mean for the rest of life on Earth, and whether or not we should do it is an invaluable yet often overlooked aspect of the scientific method. That’s why articles like this one, which wrestle with the potential repercussions of innovations before they’re realized, are so important.

In the case of de-extinct species, these authors have recommended giving them a new scientific name by adding “recr.” (from the Latin recrearis for “revived”). This will help to distinguish them from natural species in law, and by doing so, hopefully avoid some of the possible problems. Regardless of whether or not this exact label sticks, however, the conversation it belongs to is still one well worth having.

De-extinct species could be an incredible innovation, but they could also prove harmful to our equally-as-impressive, current ecosystems. Additionally, the question still stands of whether or not we’re ready to ‘de-extinct’ a species. Because DNA decays over time, many of the viable candidates for de-extinction are species that were still alive during the past few millennia. Their recent demise was due in large part to pressure that our own species’ exponentially expanding population has put on the Earth. So, to bring them back, we would also need to correct whatever factor caused their extinction in the first place. In many cases, we might not be at that point yet. 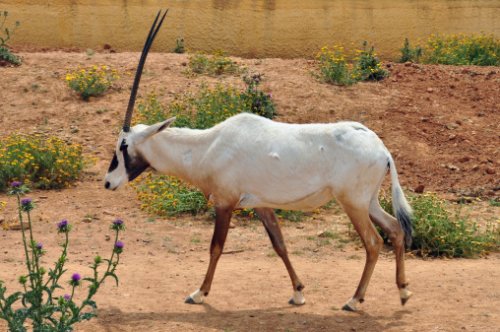 The Arabian Oryx has disappeared from many of the countries occupying its original habitat. This is due, almost exclusively, to human actions. Image: dimitris/iStock/ThinkStock

Previous efforts to restore the Arabian Oryx to the wild in 1982, for example, were thwarted when poachers almost all but wiped them out again. Conservation biologist Stuart Pimm of Duke University reflected on this, saying “We had the animals, and we put them back, and the world wasn’t ready… Having the species solves only a tiny, tiny part of the problem.”

So, while paleontologists might soon be arguing over which species should be resurrected, the possibility of de-extinction still remains largely in our hands. Whether or not we can take care of this planet might prove to be the final question keeping us from recreating evolution’s handiwork. What do you think? If we do become able to bring species back from the dead, should we, and why or why not?