Is there An Ocean Below Your Feet?

Some scientists think Earth's oceans formed when icy comets hit the planet. But new research suggests a different origin for the oceans: they simply seeped out of the center of the Earth.

The finding, published in Science, suggests that a reservoir of water is hidden in the Earth's mantle, more than 400 miles below the surface. Try to refrain from imagining expanses of underground seas: all this water, three times the volume of water on the surface, is trapped inside rocks. 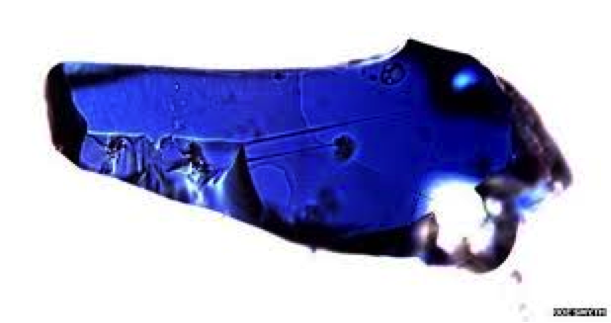 A piece of synthesized ringwoodite, the blue mineral that may contain oceans' worth of water in the Earth's mantle. Image courtesy of www.bbc.com.

Called ringwoodite, the rock is bright blue and is only formed at high temperature and pressure in the Earth's mantle. The water would have been squeezed out of the rocks, "almost as if they're sweating," Steven Jacobsen of Northwestern University told The New Scientist.

This research adds to our understanding of the complexities of the water's transport throughout the sky, across the oceans, and into the ground. From the Editor's Summary of the study in Science:

"The water cycle involves more than just the water that circulates between the atmosphere, oceans, and surface waters. It extends deep into the Earth's interior as the oceanic crust subducts, or slides, under adjoining plates of crust and sinks into the mantle, carrying water with it. "

The team of scientists used seismometers to measure the motion of energy waves caused by earthquakes through the ground below the United States. The waves slowed down as they passed through the region of the mantle containing ringwoodite. The scientists suggest that the saturation of ringwoodite with water explains the sluggishness of the waves through this particular region of Earth's center.