What is the physics behind watching a movie?

When the lights in the movie theater dim and cell phones are muted, the movie is about to begin. In the dark, you can hear an occasional cough or the rustle of candy wrappers and smell the aroma of buttered popcorn. The screen begins to reflect light. Welcome to the world according to Hollywood, a world of make-believe made from moving images and digital sound.

What is the physics behind watching a movie? While a movie character often begins in someone’s imagination, the character’s image on the screen is a real image. Light rays shine onto the movie screen to produce the image we see as a moving picture. But how is such a big, clear, and moving image produced? 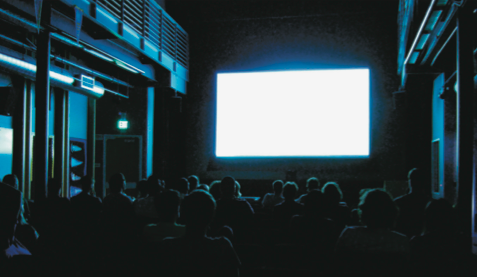 In a movie theater, you watch an image projected onto a screen. How is that done? ​PHOTO: Kenneth Lu/creativecommons.org

Have you ever made a pinhole camera? If you have, you were projecting an image onto a flat surface. The image was small, dim, and upside down. The projector at the back of the movie theater is similar, but it is a more complex optical device. It uses a very bright light source and lenses to project a big, bright image onto a screen.

Historically, all movies were recorded on film. The film—a long strip of translucent images—is positioned in the middle of a movie projector. Behind the film is a very bright lamp sitting inside a concave reflector. White light from the lamp is concentrated though two lenses— called a condenser—onto the film. The rays emerging from the condenser pass through the film. The images on the film act like a series of multicolored filters. The filtered light, carrying the image on the film, then passes through a series of lenses that spreads the light out and focuses it onto the movie screen. When the light strikes the screen, the image produced is therefore many times larger than the original tiny picture on the film. The movie screen then reflects the light that forms this image back to your eyes. 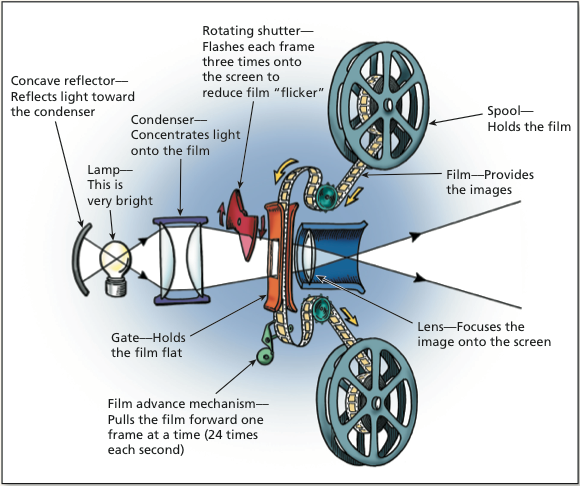 A lot goes on inside a traditional movie projector. Follow the light from the lamp through the film and the lens. ​

Until the late 20th century, movies were projected this way. The thousands of images that make up an entire movie were stored on a long piece of film. This film was wound on a reel and run continuously through the movie projector. The film was fed into the projector upside down and reversed left to right. When light rays shining through the film passed through the lenses of the projector, they crossed. The picture on the screen therefore appeared to the audience as right-side up. The projector used sprocket gears that fit into the small holes in the edges of the film to feed 24 of these separate images past the lens each second. A shutter flashed each of these images onto the screen three times. (This means 72 pictures are projected each second. This flash rate is so fast that our eyes do not notice the images flickering on the screen.) 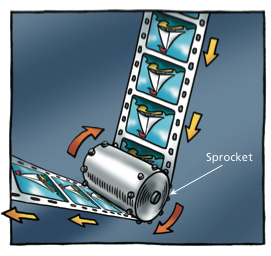 The film is fed into the projector upside down and reversed left to right. When inverted by the projector, it appears on the screen in its correct orientation.

These days, digital video has transformed the movie industry. The 2002 recording of Star Wars: The Attack of the Clones on digital
video ignited a technological shift. Instead of traditional film, movies can now be recorded digitally onto a computer and stored on a DVD or Blu-ray. This makes the shooting, editing, and distribution of a movie much cheaper. Modern digital media can store information in a way that is less likely to degrade. Every time a traditional film is run through a projector, it may get a bit stretched or dirty. Except for scratches or breakage, a DVD retains its quality over time.

The digital movie is projected using either a micro-mirror projector or a liquid crystal display (LCD) projector. A micro-mirror projector uses millions of microscopic mirrors to form the images that we see on the screen. This technology still uses a very bright lamp, in this case to shine light through a prism that splits it up into color beams. The beams are reflected off the tiny mirrors, which turn on and off in response to the video signals. An LCD projector also relies on light and mirrors; some things never change! A very bright light is reflected off a mirror that has an LCD on it. In response to the video signal, the crystals let some of the light through and block some of it.

Though these technologies are newer, they retain some of the original ideas from the invention of movies on film. Digital recording still relies on stringing together a series of images called “frames” in rapid succession to create a moving picture. While the moving image is not really continuous, our eyes and visual system interpret these pictures as uninterrupted. You will learn more about how the brain interprets information from the senses in later lessons.

Next time you go to a movie, check out the physics of the movie theater. It may prove to be as interesting as the movie!

This is an excerpt from the Electricity, Waves, and Information Transfer unit of our curriculum product line, Science and Technology ConceptsTM (STC). Please visit our publisher, Carolina Biological, to learn more.