June brought educators from around the country to Washington, DC, to experience Smithsonian research facilities, interact with scientists, and engage in activities to bring back to their classroom. These educators were participants in the Smithsonian Science Education Academies for Teachers (SSEATs), a weeklong event that focuses on the professional development of science educators. 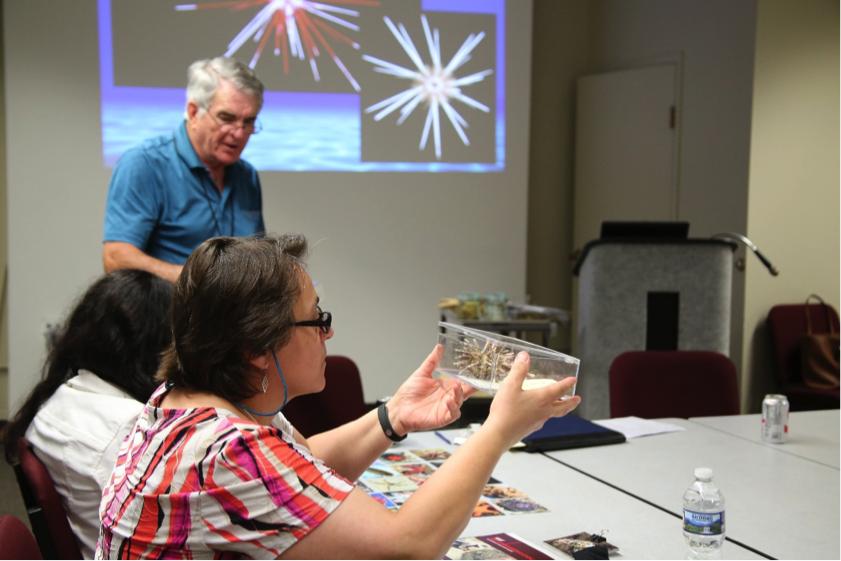 One of my favorite presentations was from Dr. David Pawson, a Senior Research Scientist and Curator of Echinoderms at the Smithsonian Institution. Dr. Pawson has years of experience working with marine life and has dedicated much of his work to one of the most well-known echinoderms, the starfish. We were very fortunate to have him share some of his knowledge and passion for these unique animals. 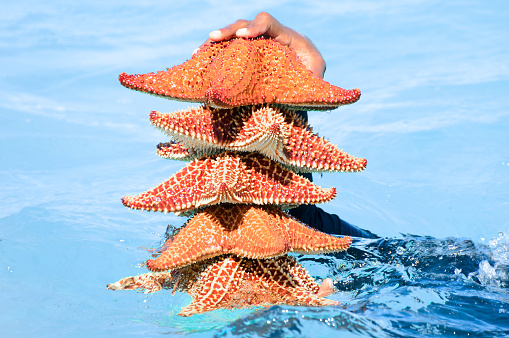 Here are some facts you may or may not have known about starfish.

Classification: Starfish are also referred to as sea stars because of their star-shaped appearance. They are a part of the phylum Echinodermata and are related to sand dollars, sea urchins, and sea cucumbers. Echinoderms are found in nearly all marine habitats and constitute a major proportion of the biomass. Starfish belong to the class Asteroidea, derived from the Greek words “aster” (a star) and “eidos“ (form, likeness, appearance). There are more than 1600 species of starfish alive today, and they have an important role in the community structure of the ocean floor.

Feeding: Starfish are mostly predators and feed on invertebrates such as mussels and clams that live on the ocean floor. Several species have specialized feeding behaviors including eversion of their stomachs. This means the starfish extends its stomach out of its mouth and over the digestible parts of its prey. The prey tissue is partially digested outside of the body, then the starfish brings its stomach back inside into its 10 digestive glands to finish feeding. If you want to learn more about this process, check out this article in the Journal of Experimental Biology where researchers investigated the compound that plays a role in this feeding behavior.

Movement: On their ventral side, starfish contain thousands of tube-like feet that contain cells that are specialized for adhesion. In a process that Dr. Pawson describes as ”rapid gluing and ungluing,” starfish can use these tube feet to move across a surface. Each foot has two sets of secretory cells that secrete compounds that allow the foot to first attach then detach to a surface. The first set of cells releases an adhesive material that bonds the fuzzy coat (the outermost layer of the tube foot) to the surface (ocean floor). A different substance is released from a second type of secretory cells that enables the foot to release from the ocean floor or other surfaces.

Regeneration: Can you imagine having the ability to regrow a part of your body? Most species of starfish can regenerate, or regrow, damaged or lost arms. They can also shed arms as a means of defense. If an arm is damaged by a predator such as another starfish or a crab, the starfish can detach that arm and grow a new, healthy one. Or if a predator grabs onto the starfish by one of its arm it can detach that arm as a means to escape from the predator. Regeneration is one way starfish have remained abundant in the diverse marine world.

Starfish and other echinoderms are extremely important to the biodiversity of our oceans. I hope that the next time you see a starfish while visiting the beach, you can take a moment to reflect in both their beauty and their importance to life on this planet. 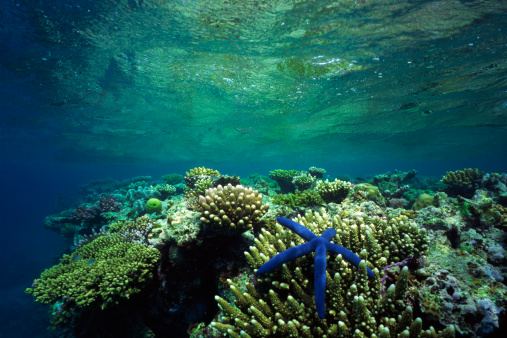 Courtney Fernandez Petty is a science communications and outreach intern at the Smithsonian Science Education Center. She is also a graduate student at the University of Alabama at Birmingham. Her doctoral work focuses on better understanding airway diseases, like cystic fibrosis, to identify novel treatments. She is active in both community and school outreach to increase awareness of the importance of science and research. She is also passionate about advancing science education by merging technology and education based objectives to prepare students for a more STEM literate society.