The Energy Beneath Your Feet

When the house feels cold in the winter, I turn up the thermostat. But not without a twinge of guilt. I know that at the touch of a button on the little white control box, a furnace hidden somewhere around the house starts huffing and puffing. To churn out hot air it guzzles electricity, which is unfortunately neither renewable nor environmentally friendly: most electricity is made in power plants from coal or natural gas. Burning any of these materials releases toxins into the air. These in turn contribute to raising temperatures and air pollution levels all over the world. 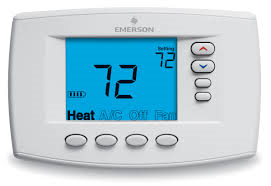 The touch of a button on a thermostat nudges the furnace into electricity-consuming action. (Image from here.)

That's where the idea of geothermal heating comes in. We know we need heat -- no one should be expected to suffer a Michigan winter or the Snowpocalypse without it -- and as it turns out, the Earth has a lot of heat ready-made. It is all trapped underground in great quantities of rock. This is great news for us. Because energy can't be created or destroyed, just transformed or moved, humans have limited ways of getting it. Along with the few usable energy sources that are accessible to us -- oil, rocks like coal, moving water, the sun -- the warmth nested inside the Earth is like a treasure chest. We just need a good way to open it and get the treasure from down there to up here.

One way to mine the Earth's heat is to build a kind of elevator that rides down and back up, transporting warmth up to the surface. Since heat energy has no physical form -- it's just a force that can inhabit a physical object, like rock -- our elevator has to be specially equipped to be able to take the heat. (Literally.)

The ideal elevator is not fancy contraption full of ropes and pulleys. It's a combination of simple, readily-available fluids inside a pipe. As explained by the laws of physics, fluid absorbs heat whenever it gets the chance. Think of the water in a pot on your stove. When the stove is turned on, the water itself turns from cold to hot by absorbing the heat energy that's nearby. The idea is that we should be able to do something similar with the heat in the Earth.

First, we can drill down below the surface and insert a pipe that dives down and then runs back up. When the water carried by the pipe is deep enough to be surrounded by the rock, liquid molecules can't resist picking up heat energy and taking it along for the ride. When the water exits the rock, it is hot -- and we haven't even burned fuel or released noxious gas into the atmosphere to get it that way! Then water is simply shoved up the pipe back to the surface, where its cargo can be transformed into heat usable in my house or yours.

Learn more about geothermal heating at Energy.gov. This article was based on a talk by Benjamin Phillip at SSEATS.