The Man Who Knew Infinity (and Even Bigger Numbers)

Director Matthew Brown’s newest film, The Man Who Knew Infinity, opened in April to positive reviews from critics and shed light on the life of a little known mathematician: Srinivasa Ramanujan. Born in Erode, India, in 1887, Ramanujan had a veracious love and instinctual understanding of mathematics. Living poor in South India with no college degree, Ramanujan was able to gain recognition for his inventive theorems and began a correspondence with a Fellow, G.H. Hardy, at Trinity College of the University of Cambridge. Impressed by Ramanujan’s insightful work, Hardy invited him to Trinity where they would work together on research for five years. The film depicts the friendship of the two men during Ramanujan’s time at Trinity and the obstacles they faced due to the prejudices of colleagues. In the end, Ramanujan’s monumental abilities spoke too loudly for his opponents to ignore. He was inducted to the Royal Society and Trinity College as a Fellow (the first Indian to ever be honored with the former position) at the age of only 30. 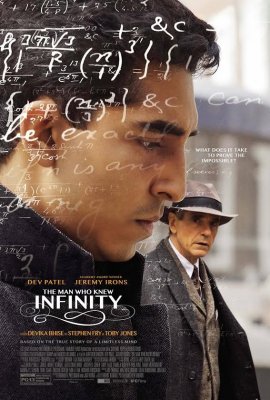 Image from poster for the film The Man Who Knew Infinity

Sadly, while Ramanujan’s insights into mathematics were outstanding and beautiful, they were also short lived. At the end of his five-year stay at Trinity, Ramanujan returned to India where his health declined and he died in 1920 at the age of 32. While it’s impossible to say where mathematics would be today if Ramanujan had lived the long life he deserved, his contributions in his lifetime still made lasting impacts on the world of mathematics. In particular, his work on partitions in number theory left a lasting impression on the field. Partitions are, essentially, the number of ways an integer (a whole number) can be broken down and recombined. For example, the number 4 can be represented as 1+1+1+1, 1+1+2, 1+3, 2+2, and 4 for a total of 5 representations (for a great video about Ramanujan’s work on partitions click here). These partitions can be calculated by hand, but the process becomes very tedious with larger and larger numbers. Ramanujan’s contribution to this problem was introducing a formula that made it simple to calculate the number of partitions for any integer with greater accuracy as the integers approached infinity. In fact, such a formula can show that numbers exist beyond infinity because the number of ways to break down and recombine infinity is greater than infinity itself. Partitions are not only important for computer algorithms but physics and cosmology as well.

Image of Ramanujan from www.gcse-maths-revision.co.uk