Behind the Scenes
31
Aug

Earlier this summer, 21 teachers from across the country came together in Washington, DC, for this year’s Smithsonian Science Education Academy for Teachers (SSEAT) on Earth’s History and Global Change. The participants spent time behind the scenes at the National Museum of Natural History, the National Air and Space Museum, the Carnegie Institute of Washington, and NOAA Headquarters. Throughout the week, they learned about the origins of the solar system, about our footprint on Earth, and about the Smithsonian. 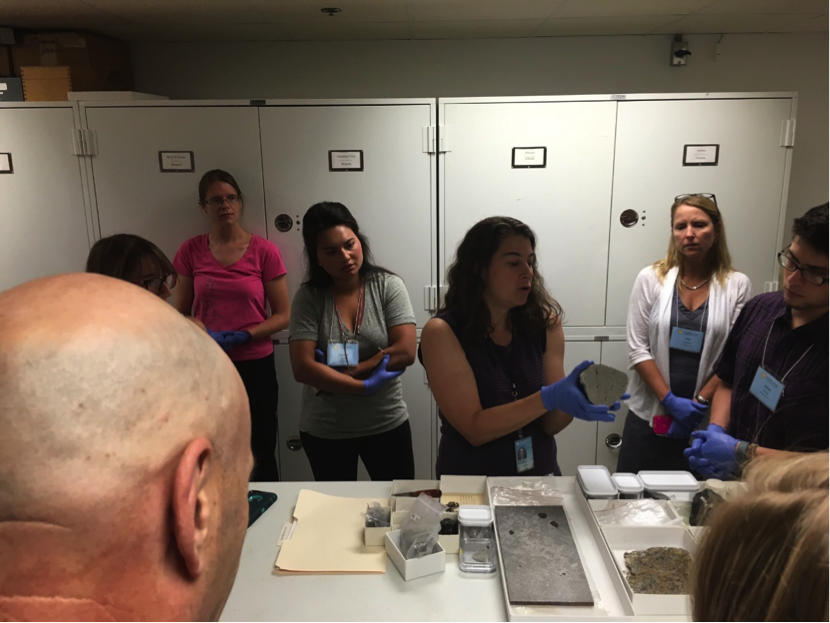 Participants had the opportunity to directly handle samples of meteorites in the collections area behind the scenes at the National Museum of Natural History.

The story of the week was Earth, how it was formed, the effect humans have on it, and the need for awareness and caution going forward. Accordingly, participants first learned about the formation of the solar system, supplementing lessons on meteorites with a trip to the National Air and Space Museum. They worked in small groups with four researchers to learn about how scientists study various aspects of terrestrial bodies. Over the week, they flew through the millennia learning about ancient life by exploring the Ocean Hall at the Natural History Museum, discovering evidence for the death of the dinosaurs in ancient ocean soil, and eventually taking a look in the mirror with a guided tour of the Human Origins exhibit. Along the way, they learned about the various effects human growth has had on the planet: specifically, that the rate at which change occurs is increasing to unsustainable levels. The teachers left with a better understanding of why issues such as climate change have clear, pressing relevance to our lives today.

Participants were able to interact with NASM researchers in their offices.

SSEATs are a little different compared to traditional teacher professional development opportunities. The goal of our week is to connect teachers directly to world-class researchers, and the Smithsonian is second to none for this end. Our teachers spend the week interacting with over a dozen active geologists, astrophysicists, and other experts in their element; they get to see what real scientists look like, and even more important, what real science looks like. To the public eye, science tends to feel like some strange mysticism through which eccentric geniuses conjure the future into being. One of the focuses of the SSEAT is to dispel this fantasy, unite teachers and scientists in a love of learning, and show that they are normal human beings with a passion for science. Carnegie’s Emma Bullock may be a respected geologist, but she spoke to participants as equals, joking and making small talk even as she guided them through using a scanning electron microscope. These moments are what make SSEAT special to me, as someone who hopes to be on Emma’s end of the picture one day.

I learned many things during the week, but number one is that things are changing and we are the cause of it, so we have to be the solution, too. The knowledge required to create these solutions begins in laboratories like Brian Huber’s at the Natural History museum, but it will require a global effort, which means people, both young and old, need to understand the problem. Bringing teachers and researchers together is one of the best ways to kick-start this effort. In this way, SSEATs plays a vital role in making the world a better place. 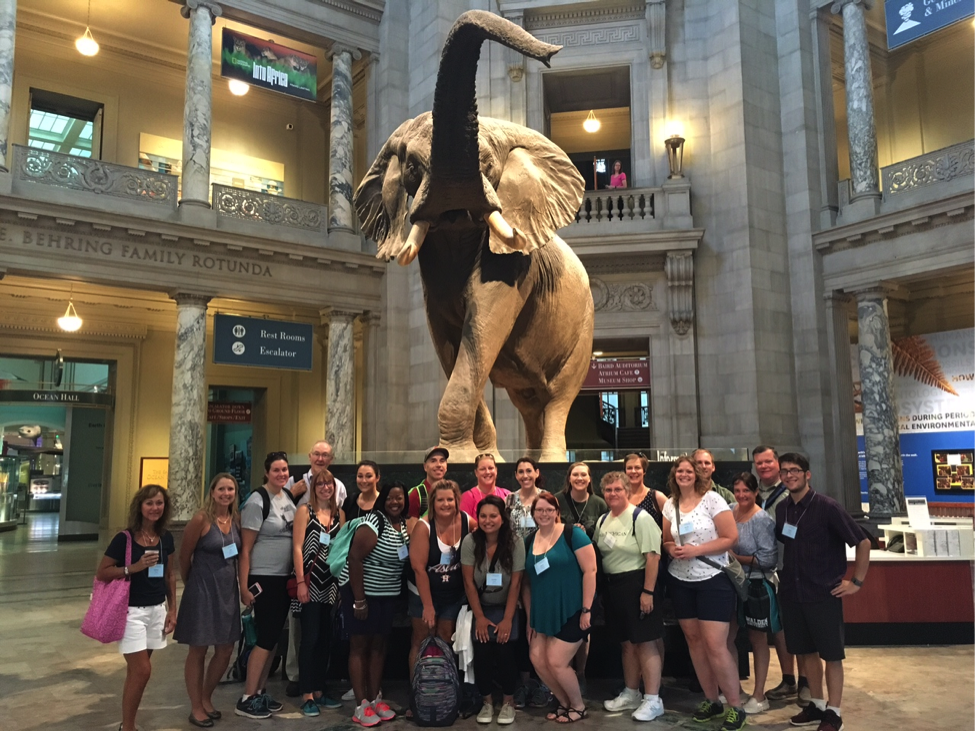 Participants pose for a group photo with Natural History’s Henry the elephant.